A lawsuit was filed against the federal government Tuesday alleging Naval Hospital Jacksonville staff allowed a piece of needle to break off in a woman’s spine during a caesarian section performed 15 years ago, never told her about it and then tried to cover it up.

Jacksonville based law firm Cronin & Maxwell, P.L., filed the lawsuit on behalf of Amy Bright and her husband, Navy veteran Charles Bright, of De Soto, Illinois. Charles is a retired Navy chief corpsman who was working at Naval Hospital Jacksonville at the time of the procedure in question.

According to the suit, the family wasn’t told that during an attempted spinal anesthesia, a big piece of needle broke off into Bright’s L4 vertebrae, where it remains embedded to this day. 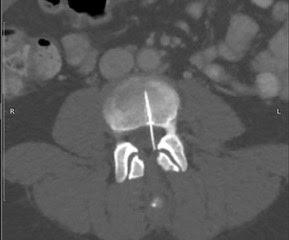 Ms. Bright went to Naval Hospital Jacksonville for the planned C-section of her third child on September 5, 2003. During that procedure, hospital staff planned to administer spinal anesthesia rather than general anesthesia to numb her. 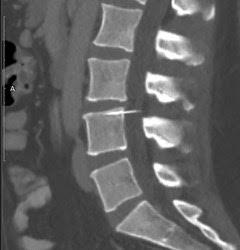 Spinal anesthesia is typical for C-sections. Medical professionals claim it’s easier on the mother and it allows them to stay conscious during the procedure. It also allows the mother to hold her newborn child as soon as it’s born.

“They attempted to do it [spinal anesthesia], but during this, it was actually a lengthy procedure, they broke off a large piece of a spinal needle in her spine,” said the Brights’ attorney, Sean B. Cronin. “So this needle is about seven to nine centimeters in length and currently she has three centimeters that’s still embedded in her spine. It was broken off at the time. This probably represents about a third to half of the needle. So it’s very obvious to anyone who’s performing anesthesia on someone that half the needle is missing.”

Cronin said they’re not sure at this point who specifically attempted to administer the spinal anesthesia. They do know it was a two person anesthesia team and they believe the needle was broken by someone under training.

“I’m told by my expert when you insert the needle it should feel like it’s going through butter,” said Cronin. “When the butter stops, that’s when you stop. And to push the needle that far is just unconscionable. It’s literally pushing across the [spinal] canal, into the wall [of the vertebral body], and then there’s a little ridge there and rather than pulling straight back they give a little bend to the needle and that would cause it to snap off.” 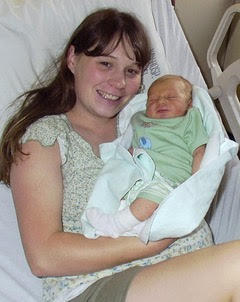 Since delivering her son, Jacob, in 2003, Bright has been plagued by chronic pain from the permanent nerve damage caused by the broken needle, which is touching the nerve that leads to her left leg. The result is a severe nerve injury that causes pain and numbness in her lower back, left hip and left foot. Bright claims the pain has gotten worse over time, making it tough to sit or exercise because the needle inflames the nerve whenever she moves.

She didn’t know all of this pain was due to the broken needle in her back until a November 2017 CT scan was done while she was living in Texas. Army doctors there diagnosed the problem.

Up until that point she was told by various doctors at different facilities that these were just symptoms of the aging process. She was diagnosed with back pain and radiculopathy - a pinched nerve. Doctors prescribed her pain medication and she was sent to a pain specialist.

When Cronin was asked why no one ever thought to do a spinal CT scan before now, he replied with a query of his own: “Why would anyone think that there’s a needle in someone’s spine? This is not something you ever see.” 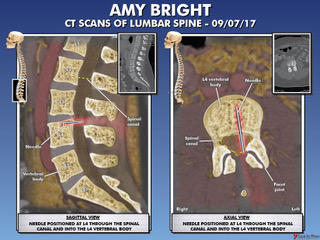 Since her diagnosis, Bright has seen three neurosurgeons who all said they could remove the needle... but they strongly advised against it.

Because the needle has been lodged in her vertebrae for such a long time it has become calcified in the bone and nerve roots have grown around it.

“There’s a golden window of opportunity and if you get this taken out while it’s fresh and the structures haven’t adhered around it, you could have likely removed this safely,” said Cronin.

If the needle were to be removed now, it would leave a hole on the far side of the spinal cord’s thecal sac and surgeons would be unable to close that hole.

“She would likely have permanent headaches from a spinal fluid leak,” Cronin said. “They literally said there’s a possibility she could be paralyzed for life if they remove the needle.”

So, rather than remove the needle, doctors have prescribed Bright opioids to help deal with the pain. But she only takes them when she feels like she absolutely has to.

“She doesn’t like them,” Cronin said. “She’d rather be in pain than take the medications.”

Cronin said she’s also taking nerve medications now, which do provide some relief. But, he said, “this has robbed her completely of her quality of life. She does the best she can but it’s a daily ongoing problem of permanent, intractable pain.”

“To have other military personnel do this to me and not say or do anything is appalling,” Bright said. “I’m a military wife. We keep everyone together while our loved ones are fighting for our country. It really hurts to have the error swept under the rug and the government ignore my situation. They’ve shown me no compassion.”

“I and the family are very, very disappointed that these individuals chose to be so cowardly and blatantly cover up such a serious, serious medical problem,” Cronin said. “This is something that should have been reported. They should have done the right thing. They should have admitted their mistake and this whole thing could have been avoided. It could have improved the quality of someone’s life but because they chose to behave so unethically, they have sentenced her to a lifetime of pain.”

Cronin filed a tort claim on the Bright’s behalf in March, giving the government six months to respond. The Navy reviewed that claim and denied it, saying it falls outside of the Statute of Repose, which, according to Cronin, basically means it happened too long ago. The Statute of Repose can be as short as four years in the state of Florida.

“Let’s just say it’s a big Statute of Limitations defense,” Cronin said. “Our position is, this is governed under federal law. In federal law, it’s called accrual, and under federal law, your statute of limitations does not run until it accrues. You have to know of the injury. From our perspective, that’s kind of common sense. Because if not, they get away with this coverup. They get away and they go ‘oops!’ Everybody’s gone on, they’ve retired, and she’s left with a life-long pain condition.”

Cronin said this lawsuit could take years. If the court rules that the Statute of Repose has run its course and it applies in this case, there will be an appeal to the 11th Circuit. “That could take, certainly, a year or two to complete this process,” he said. “Maybe longer.”

In response to a request from WJCT News, Naval Hospital Jacksonville wrote, “We’re deeply committed to providing the best care to every patient entrusted to us. Due to patient confidentiality and privacy laws, we’re prohibited from providing any additional comments.”

A Navy wife says Naval Hospital Jacksonville left a portion of a needle in her spine when she gave birth there over a decade ago.