With South Florida emergency rooms overflowing and body counts rising, the only way to halt an epidemic of the designer drug Flakka is education and community outreach. 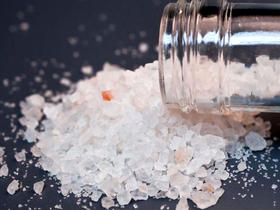 “These are drugs today, guys…PHO, shatter, butter, research chemicals, bath salts and spice. I mean, nothing that we’re used to. Nothing that we would be expecting to see as the biggest drugs of abuse in Broward County for sure, but also throughout the country, and I’ll show you…”

Somewhere in that soup is Alpha PVP, or “Flakka,” a white powder that sent 40 Broward County victims to the morgue in the past 8 months and others running paranoid and naked down the streets.

At certain doses, Flakka creates a crystal meth like high and can be more addicting than cocaine, experts say. But the line between euphoria and so-called “excited delirium” is razor thin.

Excited delirium has caused victims to throw rocks through police department windows and impale themselves on fences. Adrenaline dumps give them super human strength. Untrained police could make a tragic mistake, Scharf says.

“So the signs that we know and we see are going to be important for us to impart on these folks so that they don’t make a mistake and shoot somebody.”

Gadsden County Sheriff Morris Young says he invited his Broward counterparts to North Florida because he thinks the plague is spreading.  Young says two deaths have been attributed to Flakka in Gadsden since June and emergency medical personnel are fielding five calls a day.

“It seems like it’s worse, really, as far as the attitude people have when they take this drug. It’s hard to control them. Even when they come to jail. We have to put them aside, put them separate, because they’re more violent.”

“Hopefully with this type of training and education of our citizenry, we won’t get to that level.”

The good news, according to Broward County Sheriff’s lieutenant Ozzie Tianga is that the trend might be slowing. The four hospitals tracking flakka-related admissions in Broward County report the number of daily admissions has fallen – from 11 to 9.

A Broward County grand jury is preparing to investigate the distribution and use of the synthetic drug flakka following at least 33 deaths linked to the substance over the past 10 months.

Deputies, EMTs and investigators from the Broward County Sheriff’s Office are fanning out across the state to teach their colleagues about the highly addictive street drug, “Flakka.” Florida law enforcement agencies are bracing for a wave of bizarre behavior and vicious crimes.

The uptick in flakka cases in South Florida has prompted Broward Sheriff’s Office to come up with a plan to combat the distribution and use of the drug.

According to BSO’s website, there’s been a 45 percent increase in flakka cases so far this year compared to last year.

Broward Sheriff Scott Israel says his department has started by educating the public.