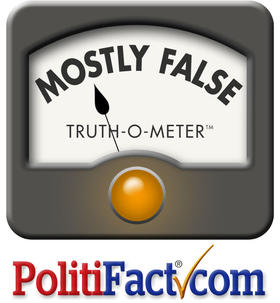 Right around the 4th anniversary of its passage, the deadline to sign up for health insurance under the Affordable Care Act -- also known as Obamacare -- has come and gone.

While the White House has been celebrating the number of sign-ups -- a number that's in dispute -- critics, including many Republicans, claim the law is fatally flawed.

Republican Gov. Rick Scott is using Obamacare as a wedge issue in his campaign against likely Democratic opponent Charlie Crist.  Scott says the law is causing folks to lose their health care plans -- and that it's hurting the economy.

Rubio spoke out against the law in a video message to his supporters.

"We cannot give up," he said. "Obamacare is not something that’s set in stone. It can be repealed —and Americans increasingly want it to be repealed — and that’s what we’ll continue to do."

"We rated that claim mostly false," said Josh Gillin of PolitiFact. "That's because while there are quite a few people who want that repealed, the idea that more and more people want it repealed isn't quite true.

Gillin said that surveys have consistently shown that anywhere from 35 percent to 5o percent of Americans favor repeal of the ACA, but those numbers have stayed pretty much the same since 2011.

Gillin said, "there's just no proof that they're been increasing like he says they have."

Republican Gov. Rick Scott’s political committee, Let’s Get to Work, is running an ad that repeats parts of an interview Crist did on CNN during which he called Obamacare "great."

While the narrator says that last part about jobs, there's a picture saying, "2.5 million Americans out of the workforce."

Not so, said Gillin.

"We rated this one mostly false. That's based on something that happened in 2013 when Florida Blue starting sending out letters to 300,000 of its policy holders saying those policies did not meet minimum requirements for the Affordable Care Act," he explained. "What happened was, when the government decided to extend the deadline for the insurance plans that may not have met the requirements, Florida Blue had only sent out about 40,000 letters. Those letters said they were actually going to switch people over to another plan and that they would help people find plans that met their needs. No one was ever going to go uncovered."

And what about the economic impact of the ACA and the claim that 2.5 million Americans will be out of the workforce?

"We rated that one mostly false, " Gillin said. "We've seen this ever since the Congressional Budget Office -- the non-partisan part of the government that analyzes such things -- ruled that up to the equivalent of 2.5 million jobs would be gone by 2024. That's a statistical way to look at things... those are work hours. And the reason those work hours are going to disappear is because now that people are covered and their insurance is not necessarily tied to their employment... they would choose to stop working. They would quit part-time jobs, they wouldn't work 60 hours a week. And that's just not quite the same as leaving the work force."