Charity Helps Florida Students Get Dressed To Head Back To School

At last count, during the 2013-2014 school year, the number of homeless students had risen to more than 71,000 in Florida's public schools. For many of these children, a brand-new school uniform may be out of reach, though school officials say it makes a big impact on their attitude. One longtime charity in Lakeland is quietly helping to fill that need.

There are only two branches in Florida, both in Polk County. One is in Bartow, and the Lakeland branch -- founded in 1935 -- is celebrating its 80th anniversary. Many of the volunteers have mothers or grandmothers who raised money for Needlework Guild.

The charity goes about its work very quietly. In the spring, a group of ladies each write several of their friends and ask them to donate.

"I have five or six people, who every year I pick up a $50 check from them. And that's it," says Lizbeth Engle, who manages distribution for the Needlework Guild. "My tennis buddies, my lunch buddies and people like that."

Lizbeth stands in a room filled with hundreds of cardboard boxes. Each box is filled with school uniforms: khaki pants or skirts, polo shirts, underwear, socks and belts.

Workers from the local Beall's department store dropped off the clothing the day before and stayed to unpack and help sort the items. Now, Lizbeth is taping up the boxes to send to all the elementary schools in Lakeland. But before she does, she drops in a pink letter. 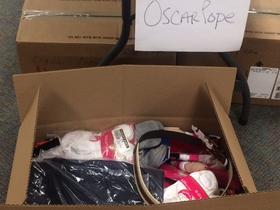 "I'm enclosing a letter addressed to the principals and guidance counselors, reminding them what we do," Engle says. "Most of them have grown to expect these items of clothing. And we like to let people know what we do. We don't self promote very much."

That lack of promotion means that most people have never heard of the Needlework Guild, or NGA, Inc, as it's now officially called. There are no fundraisers, no campaigns and no billboards. But the $25 and $50 donations add up. This year, the group collected roughly $70,000 from about 1500 contributors. A volunteer board places the clothing order with Beall's, which delivers the clothes before school starts. There are no administrative costs. The school district delivers the boxes to 26 elementary schools throughout Lakeland.

Hope says she sees her share of the county's burgeoning homeless student population. Many families are staying in motels or sleeping in cars. The new clothes, she says, makes a big difference.

"For the little ones just starting it makes them really happy, because the first day of school is scary anyway. They can come dressed like every other child, in new clothes, looking good , feeling good. I think it impacts the kids a lot because just to see them in the hall telling me 'look at my clothes!' They're very pleased."

When it comes to children, the definition of homeless includes more children than you may think.

Under the federal McKinney-Vento Homeless Assistance Act children and youth who "lack a fixed, regular, and adequate nighttime residence are considered homeless." That means children who are living in motels, hotels, trailer parks, or camp grounds -- or doubled-up with relatives or friends  --are homeless, as well as those who stay in shelters, on the street or in abandoned buildings.