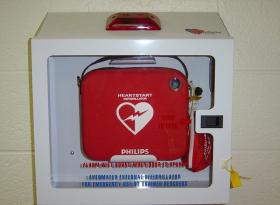 The parents of a brain-damaged former Florida high-school soccer player may get to bring their negligence lawsuit before a jury, depending on how the state Supreme Court rules. The court is weighing whether to undo the suit’s dismissal by two lower courts.

Listen
Listening...
/
Hear the radio version of this story

In 2008, Lee County soccer player Abel Limones, Jr. became unconscious after collapsing during a game. Records show his coach called for an automated external defibrillator (AED), but no one used it as he lay waiting for an ambulance. Two lower courts dismissed his family’s suit against the school, partly because Florida law requires schools to have a defibrillator and train someone how to use it but stops short of requiring the device to be used in an emergency.

But during oral arguments Monday, several Supreme Court justices questioned the lower courts’ interpretation. Justice Fred Lewis said it makes no sense that lawmakers meant to require the resuscitator without expecting schools would use it.

"I mean, I’m sorry, I’m just missing—this is going right over my head as virtually nonsensical," he said.

"That's like getting a fire extinguisher and not using it, " Chief Justice Jorge Larbarga added.

And Justice James Perry said, "They're just basically trying to sell AEDs to the school. Just have them there and you're fine. OK, I got it."

If the court sides with the Limones family, they would have the chance to try and convince a jury the school district was negligent.

A game at a Hialeah Gardens school “spirit day” caused traumatic brain injuries for a 15-year-old freshman who was in an inflatable sumo wrestler suit, according to a lawsuit filed by  the girl and her mother. As the Miami Herald reports, the lawsuit alleges freshman Celaida Lissabet’s school and the event company did not properly fit her helmet. Her lawyer says the teen now has trouble communicating and has reverted to “child-like” behavior.

To Save A Life, Odds Favor Defibrillators In Casinos

If someone's heart suddenly stops beating, a quick shock can be a lifesaver.

By the time a person can get to the hospital, though, it's often too late. The chances of survival are best, in fact, if the shock is given within three minutes of a person's collapse.

The state's civil rights laws include the protection of women discriminated against for pregnancy, the Florida Supreme Court ruled Thursday.

The opinion finds that the intent of current statute, though not explicitly addressing pregnancy, protects individuals based on gender.

In a 6-1 decision, the majority justices apply their ruling to the case of plaintiff Peguy Delva, who was working for South Florida real estate developer Continental Group when she became pregnant.