Dominique Marshall moved a lot in her youth. She called many different places "home" over short periods of time when she was 17. She learned at a young age that the public school staff and liaisons she grew up around weren't adequately trained to recognize homeless students.

"I wasn't identified at the school I was at and because of that I didn't qualify for many services until I went to a shelter," Marshall, 23, says. "Even then, the liaison in Philadelphia didn't really have a conversation about what was going on."

The McKinney-Vento Act requires every school district to designate a liaison that identifies homeless students to help them receive needed services. Schools have to immediately enroll children who are homeless even if they don't have the typical paperwork. The students are also given school uniforms, if they are used, and transportation services.

Marshall had to advocate for herself. She stayed in a shelter for nearly a month through the Runaway and Homeless Youth program, a short-term transitional residential program, but she ended up couch surfing again at friends' and families' homes soon thereafter. It became difficult to find a job, and housing grants were unattainable. The 23-year-old later ended up having to drop out of college.

"I was also dealing with my own struggles — trauma as a child, becoming an adult, and being homeless," Marshall says. "Many times people look at homelessness as if you're just out in the streets, but it looks very different for everyone."

Barbara Duffield, executive director of SchoolHouse Connection, a national nonprofit organization dedicated to overcome homelessness through education, says identifying children and youth who are homeless is a challenge. Hidden homelessness is one of the many reasons. These are people who are temporarily staying in someone's home and not receiving support.

"Most families and youth that are homeless aren't in shelters, they are not on the streets, they're going from place to place," Duffield says. "Identifying is so important because if we don't know who is experiencing homelessness, then we can't make sure they have the resources they need."

Darla Bardine, executive director of the National Network for the Youth, says it also makes it difficult to help this population because there is not one uniform federal definition or eligibility requirement when it comes to homelessness.

She says the Department of Housing and Urban Development (HUD) has the most narrow definition of all the federal agencies. It only includes people living in shelters, transitional housing, or on the streets or other outdoor locations.

This doesn't include people who are couch surfing or paying to stay in motels, for example. So, someone like Marshall, who spent most of her youth moving around, wouldn't be eligible for any housing assistance but would be eligible for homeless programs under the Department of Education.

"Their narrowness of the definition and eligibility requirements really excludes a lot of children, youth and families who are experiencing homelessness," Bardine says. "It is very much focused on chronically homeless single adults."

A legislation introduced in the U.S. House of Representatives would change the homelessness definition of HUD to align with those of other federal agencies so more children, youth and families can have access to housing assistance. It would also lead to more accurate data.

The HUD definition puts many vulnerable people at more risk. In 2019-2020, schools identified 1.28 million homeless students. Meanwhile, HUD identified 106,364 children under 18 and 45,243 young adults, 18 to 24. The HUD count is considered the official count of homelessness. Bardine says it is what Congress uses to make decisions about funding and policy regulation for homelessness in the United States.

Marshall's brother is on the autism spectrum, which makes it difficult for him to access services on his own. He had been staying at a family member's home when Marshall had to help him find a shelter so he could receive housing assistance.

"He ended up staying in an adult shelter and he was just about to turn 19 at the time," Marshall says. "He was with people twice his age and he had to stay there for a night to be able to qualify."

Kedric Sledge, a school social worker at Fulton County Schools in Atlanta and a member of the National Board of StandUp for Kids, a non-profit addressing the youth homelessness crisis, says one of the biggest barriers he sees with homeless students is that school isn't their main priority. Students skip two or three days a week because they're more focused on making an income.

"They want to work first, and a lot of the time school comes second," Sledge says. "They just want to get those basic needs met — get money for hotels, get some food on the table, toiletries and things of that nature."

Myshelle Bey spent a majority of her youth homeless. She was kicked out of her grandmother's home when she became pregnant with her son at 18 and started staying in other people's homes. She had to put school on the back burner.

"I worked all the time, and at one point I had an overnight job, a day job and I was going to school," Bey says. "And I tried to make sure I was always busy and did not try to focus on the situation I was going through."

The school was aware that Myshelle Bey did not have a stable place to live. She says the school didn't offer many resources. And her grandmother, who struggled with drug addiction, did nothing to help.

"It was just very hard to deal with school, and the teachers weren't really understanding of that, they were just like 'you're supposed to be in school,'" Bey says. She is located in Boston.

She dropped out of high school and gave custody of her son to her mom.

Duffield says roughly 68% of students who experienced homlessness will graduate from high school. Others, housed children living in poverty, graduate high school about 80% of the time.

"We also know that lack of a high school or GED is the single greatest risk factor that is associated with continuing to be homeless as an adult," Duffield says. "Homelessness disrupts education, but education is critical to getting out of homelessness."

Bey completed her GED in 2019 and is currently getting her cosmetology license. The 27 year-old hopes to work in a hair salon while pursuing an associates degree.

Sledge says he is an advocate for vocational programs and HVAC training programs that can teach homeless students about the necessary skills they need to work in trading or welding. It allows students to learn how to do a job that can help them make money.

Job Corps, a program that offers free education and vocational training to young adults between 16 and 24 years old, is one of the programs Sledge is pushing for the most.

"They get housing for one, they are able to either choose a high school diploma or a trade when they are in Job Corp," Sledge says. "They get allowance — maybe about 25 dollars a week — and at least they get shelter and room and board."

Many homeless children and youth also try not to be detected by the system because of the stigma behind homelessness.

Simeria Dewalt is a mother of four children between the ages 16-24 who were all in the public school system. She says her older children struggled academically when they first moved to the shelter. The embarrassment of not having a home hurt the most.

"They were more afraid of what people would think, and they would hide going into the shelter and coming out," Dewalt says. She lives in Elizabeth, N.J.

"It really means that the school district and the school staff need to be sensitive and also very proactive in doing outreach, not just using the word homeless for example," Duffield says.

Schools should train educators to notice signs of potential homelessness in students, she says. This tends to include students with frequent absences, students wearing the same clothing, students hoarding food or changing behavior like withdrawing or acting out.

Dewalt is a peer recovery specialist at Prevention Links, a nonprofit that provides free recovery services for people with substance abuse disorders. As a support specialist, she believes it would be beneficial for schools and shelters to have counseling sessions with homeless students to learn different ways to communicate with other students about their situation. She says many children, like her own, don't know how to deal with questions their friends may have at school.

She says also having participants who were homeless come in and share a success story might make students understand homelessness isn't permanent. Dewalt wants homeless students to understand that this is a situation many people go through and one that they can overcome.

"I was at one point suicidal, but I'm here today so [I know] it can get to the point where you feel like you want to break," Dewalt says. "But if you have someone to talk to, who is encouraging you, and uplifting you, then that may change." 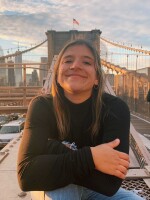