Videos and photos of police officers responding to Marjory Stoneman Douglas High School on Feb. 14 show them saving at least two victims by applying tourniquets to gunshot wounds on their legs.

Now, Julie Osheroff is learning how to do that. And she's not a cop — she's a teacher.

Osheroff recently trained with about 85 of her colleagues in how to be a first responder.

"When I went to school to become a teacher, I was not signing up to be a paramedic, or to be a police officer," said Osheroff, who teaches math and science to fourth graders at Coral Cove Elementary School in Miramar. "These kind of trainings … just make it very real that we could be in this situation."

Osheroff is one of more than 7,000 teachers in Broward County who have already completed a one-hour training in how to control the bleeding of a gunshot wound or a serious cut.

As soon as next year, the training could be mandatory for all teachers in Florida. It's one of the ways life in public schools is changing as a result of the massacre in Parkland that left 17 people dead and another 17 wounded.

Listen
Listening...
/
Listen here to the audio version of this story.

A commission created by the Florida Legislature to investigate the shooting plans to recommend that all schools train teachers in bleeding control and store kits with tourniquets, gauze and other supplies. Lawmakers will use the panel's recommendations, due Jan. 1, to inform their continued response to the tragedy.

The legislative session starts in March. 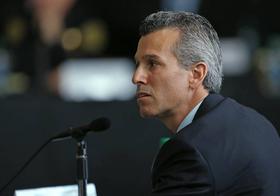 "Unfortunately, our first responders are our regular citizens — the 330 million Americans," said Max Schachter, whose son Alex was killed at Stoneman Douglas and who is a member of the Marjory Stoneman Douglas High School Public Safety Commission.

During the panel's November meeting, Schachter stressed the importance of more people learning how to control bleeding.

At the next meeting, Schachter advocated that all students should be required to learn, as well — possibly as a graduation requirement. The chair of the commission, Pinellas County sheriff Bob Gualtieri, said that was going "too far."

The Obama administration launched the national "stop the bleed" campaign three years ago as a response to the 2012 shooting at Sandy Hook Elementary School in Newtown, Connecticut.

The idea is this: It takes only three to five minutes for someone to bleed out from a gunshot wound. It often takes longer than that for medical help to arrive. But if the injury isn't fatal — for example, someone was shot in the arm or leg — controlling the bleeding can save the person's life.

Candace Pineda said bleeding control is similar to cardiopulmonary resuscitation, or CPR. It used to be something only doctors, nurses or paramedics knew how to do. But then people in the general public learned, and they were able to save people's lives during emergencies before medical professionals had time to get there.

Pineda is the administrative director of trauma and acute care surgery at Memorial Regional Hospital in Hollywood. She began training teachers and even some students interested in careers in medicine how to control bleeding last year, before the shooting at Stoneman Douglas.

Pineda worked with Hollywood Fire Rescue to secure state grants totalling about $120,000. The money pays for the training and the bleeding-control kits, which have been placed in schools and other public places, like government buildings and parks. She has worked with manufacturers to negotiate down the cost of each kit to about $43. There is now at least one kit in every public school in Broward.

This school year, Memorial Regional and local fire departments with emergency medical services units began ramping up efforts to train teachers, because of what happened in Parkland. Eventually all teachers and some other staff at traditional public and charter schools and adult learning centers in the district will be trained.

"Some are very hesitant. They don't want to know the skill; they just want to teach," Pineda said, describing teachers' reaction to the training. "It's a scary concept to have to feel like you have the burden to be a medical professional when you're not."

Pineda said she stresses the training isn't just for responding to a shooting. It's also useful in everyday life — for example, she said, if there's a car accident and someone is badly injured. She said teachers ultimately feel more empowered to help if there's an emergency.

She uses humor to try to lighten up the heavy subject matter.

"If you're military, if you're police or a Boy Scout and you've been trained in how to make a tourniquet from nothing, by all means, do it," she told teachers during a training session at the Miramar elementary school in late October. "But if you've only ever seen it on 'MacGyver' or some movie, now is not the time to take a stick and a piece of gum and duct tape and make your own tourniquet." 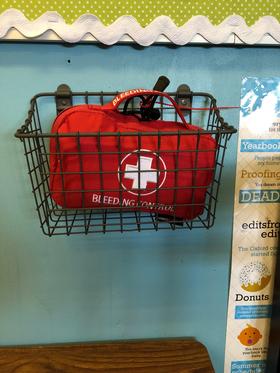 Because of the activism of Stoneman Douglas victims' parents — and the generosity of alumni — the high school is ahead of others in Broward: There's a bleeding-control kit in every classroom.

That's not comforting enough for the teachers and students who lived through the trauma on Feb. 14. Some worry the kits aren't in the right spots in each classroom, where people could access them during an emergency.

"They put in these these bleed-control kits on the opposite side of where we would hide if something bad were to happen," said junior Annabel Claprood, 17.

In one of her classes, the kit is by the door.

"It's useless over there," she said. "[If a] shooting happens, no one's running to the door to get the bleed control [kit]. Like, really?"

The Coral Springs Fire Department was in charge of installing the kits in classrooms at Stoneman Douglas. The department's public information officer, Mike Moser, said the specifics about where the kits should be placed are determined by the school district's emergency protocols.

A school district spokeswoman, Cathleen Brennan, said these protocols are exempt from public records laws because they outline the specific processes for how staff should respond to emergencies.

Nearly a year after the shooting, and under pressure from the state investigative commission, the Broward school district still does not have a policy for "code reds" — active shooter situations — other than the private emergency protocols referenced by Brennan. She said staff members are in the process of developing one.

However, Moser, from the fire department, said the kits are located in areas that are intended to be away from danger. That's different in each classroom depending on where the windows and doors are. It's possible the safest place could be near a door, if it's at an angle that couldn't be reached, for example, by a gunman shooting through the classroom door window.

Juan Cardona, chief of the EMS division at the Coral Springs Fire Department, said he understands students' and teachers' anxiety about being able to access supplies for bleeding control. His sons are adults now, but when they were in high school in Palm Beach County a few years ago, he made sure they had tourniquets in their backpacks.

"Any of us — whether we go to the movies or the mall or an airport, or our children at school — we might see ourselves faced with the need to have a tourniquet on us," Cardona said. "I think, sadly, that's kind of where we are headed."

There were plenty of missteps in communication, security and school policy before and during the Florida high school massacre that allowed the gunman to kill 17 people. Now, the state commission investigating the shooting will consider a long list of recommendations addressing these problems statewide.

It’s been almost 10 months since the shooting at Marjory Stoneman Douglas High School. In addition to the wave of student activism, there’s been an effort to understand the events that led to Feb. 14 massacre.

According to The Sun Sentinel, the Broward County school district knew more than it let on. It found the district hired lawyers and public relations consultants to keep information from the public.

Past gun violence produced few lasting changes in Florida, but the Parkland mass shooting has prompted swift new laws and a high-profile committee that is generating action.

The FBI plans to hire more staff and implement technology upgrades to its public tipline after mishandling two warnings that confessed Parkland killer Nikolas Cruz might shoot up a school.

As the nation’s eyes were on Broward County, Florida, for a flawed, week long election recount, a state commission a few miles away was investigating the county government’s role in the Feb. 14 massacre at a Parkland high school. It found that failed leadership, inconsistent or unenforced policies, and misinformation contributed to the 17 deaths.