Two North Florida lawmakers met with Wakulla County residents Thursday to hear their concerns ahead of the upcoming legislative session. 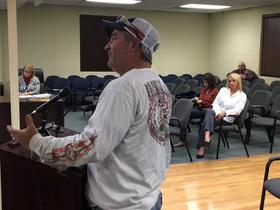 “The river has 150 feet behind her house," she said. "They can’t restore that river because that river doesn’t exist anymore. It ends up as a little canal somewhere up there by Buckeye. And it was totally destroyed all those years ago, along with the panthers that screamed in the bay at night when I was a child.”

Several residents asked the legislators to oppose hydraulic gas and oil drilling, known as fracking, because of concerns it could contaminate drinking water.

The Seminole Tribe of Florida has lost an initial legal challenge to Florida’s controversial new water quality standards, but now the Clean Water Network is about to wade into the fray.

The Seminole Tribe of Florida has filed a legal challenge against controversial new state water-quality standards, arguing they don't adequately take into account the amount of fish and other wildlife eaten by tribal members.