The VA Has Expanded Its Crisis Line, Helping It Better Respond To Veterans In Need

The VA has opened more call centers and hired hundreds of additional responders after complaints that some callers experienced long hold times or were sent to voicemail.

The number rings at the Department of Veterans Affairs Veterans Crisis Line. Originally operated from a single call center in Canandaigua, N.Y., the line now has three centers and more than 600 responders. They answer about 2000 calls per day, many of them from veterans who are considering suicide.

"A successful call in my mind is one in which someone is just about to kill themselves, and our responder talks them down, safety plans, does the consult, and gets them connected with their local VA," said crisis line Assistant Deputy Director Julianne Mullane.

Two years ago, more than thirty percent of calls rolled over to backup centers operated by subcontractors, or - in some cases - to voicemail. The VA was sharply criticized by veterans groups and members of Congress, who said the line's poor response rate meant the agency was failing vets in their time of greatest need.

"We had much more demand than we had capacity to satisfy that demand," said crisis line Deputy Director Robert Corrado.

He said that at the time of the complaints, the VA was in the middle of opening a second call center in Atlanta. There's now a third in Topeka, Kansas. The agency also changed the algorithm that routes incoming calls.

"We've gone from [call rollover rates of] thirty percent to less than one percent," Corrado said. "That means we're effectively answering every call that comes in." 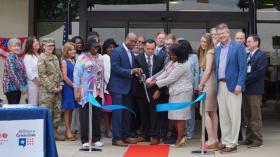 Corrado measures the crisis line's success one anecdote at a time, like the call from the mother of a young soldier in Iraq whose girlfriend had just broken up with him.

"He was sitting in a tent somewhere in Iraq, and was Skyping with his mother," Corrado recounted, "and while he was Skyping, he was holding a gun to his head. So his mother called the crisis line and told us what was going on."

Corrado said responders were able to locate the soldier and get help from the Red Cross and military police.

"His mother actually watched as the Red Cross entered the tent, wrestled the gun away from him, and saved his life," Corrado said.

Stories like this are powerful. But one frustration for crisis line counselors is that they don't know what happens to callers once they hang up the phone. The calls are anonymous, and counselors don't follow up, so there's no easy way to measure success.

"I don't think we've gotten a good grasp on that," Mullane said. "I think we're constantly trying to figure out ways to better measure our efficacy."

But broader research on suicide hotlines suggest that they work. A 2017 study found almost 80 percent of people who called helplines said making the call stopped them from killing themselves.

"You diminish the crisis, you help someone through a very difficult time and decrease the risk that that this crisis will lead to a suicide attempt," said University of Quebec at Montreal psychology professor Brian Mishara, who studies suicide prevention.

But Misara adds that telephone help lines can't solve a caller's long-term problems. And Carrado agrees that the VA crisis line is only one tool in the effort to reduce veteran suicide rates - which are about twenty percent higher than rates in the general population.

"Our business is not to sit here and think, what can the VA do to eliminate the need for a crisis center," Carrado said. "Our job is what can we do at the veterans crisis line to provide service to those who need it."

The VA has rolled out a broader anti-suicide effort that includes offering treatment to suicidal veterans even if their mental health issues aren't service related. It's also recruiting more than 2000 additional mental health professionals to work in the VA system.

This story was produced by the American Homefront Project, a public media collaboration that reports on American military life and veterans. Funding comes from the Corporation for Public Broadcasting.