TweetShareGoogle+Email
Listen
Listening...
/
WUSF's Mark Schreiner talks about some of the findings presented in USF's final report on remains found on the grounds of the Dozier School for Boys in Marianna.

Lead anthropologist Dr. Erin Kimmerle said a total of seven positive DNA matches, and 14 presumptive identifications, have been made since their work began in 2012.

Two of the DNA matches are new to the public: Grady Huff, who died in 1935; and Loyd Dutton, who died in 1918, the oldest set of remains identified so far.

Dutton was sent to the school from Lee County at the age of 14 for delinquency. He died on Nov. 4, 1918, about 10 months after arriving. It's not known how he died, but there was an influenza outbreak at the school around that time. DNA from his remains were matched with that of his great grand-nephew, David Daniel.

Huff was sent to the school at the age of 17 for larceny. He died on March 4, 1935, about seven months after arriving. His cause of death was listed as "acute nephritis, followed by hernia." His DNA was matched to that of his maternal cousin, Evelyn Hawkinson, and three more cousins: Elmer Hutchins, Geneva Harling and William Saye. 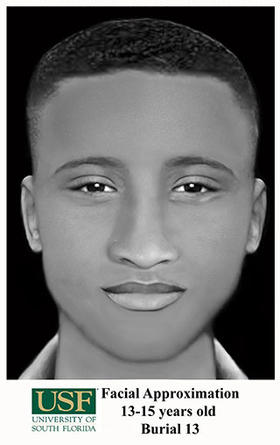 Researchers were also able to create facial reconstructions from the skulls of two other unidentified sets of remains. One was previously unveiled in April 2014, while the new one, which researchers refer to as "Burial 13," is that of an African American boy between the ages of 11 and 14. He appeared to be in good health aside from a chronic ear infection.

They wanted to recreate similar reconstructions for all of the remains, but the condition of the other skulls prevented that.

So far, remains of four of the seven boys that have been identified have been returned to families for reburial. Reburial of the other three is still pending.

While the field work is complete, Kimmerle and her team will keep working with law enforcement to identify more remains. They hope relatives of these other boys come forward for possible DNA identification and repatriation of the remains.

The team also did a thorough search of an area where a 1914 dormitory fire happened. That fire is believed to have killed eight students and two staff members, but reports from the time, as well as later research, present conflicting death tolls. While charred remains  were discovered in that area, researchers were unable to do further analysis or DNA work because of the condition of the remains.

The team ended up uncovering 55 burials, but only 51 sets of remains. It's believed the remains of some of the victims of the dormitory fire were commingled and spread throughout seven of the graves.

The researchers will present their findings to the Florida Cabinet on Thursday, and will ask lawmakers to create a plan to rebury the unidentified boys in a proper memorial.

A television documentary on the team's work at Dozier is set to air this fall.

The Florida Cabinet voted Tuesday to allow University of South Florida researchers to exhume bodies at the now-closed Arthur G. Dozier School for Boys, the Tampa Bay Times reports. The secretary of state had turned down the request, but Attorney General Pam Bondi took up the cause. The research team wants to find out whose bodies are buried at the old reform school, allegedly the site of widespread beatings.

For years, claims of abuse, beatings, rapes and murder of students by staff have come from those who survived the Dozier School for Boys,  the now-closed state-run reform school in the Florida Panhandle.

Many families are still wondering what happened to their loved ones, and some are getting answers as researchers from the University of South Florida identify remains that have been exhumed from the grounds of Dozier.

In June of 2013, Robert Stephens of Tampa received a phone call from his sister. She told him that an uncle they had never met had died at the Dozier School for Boys in 1937 under mysterious circumstances.

She added that University of South Florida researchers wanted Stephens to submit a DNA sample to see if they could identify his 15-year-old uncle as one of the bodies believed to be buried in an unmarked graveyard on the now closed reform school’s grounds.