Right now, if a researcher wants to confirm there’s a red tide outbreak – you know, that algae bloom known as Karenia brevis that turns water red or brown, kills marine life and makes a horrible stench – they have to take a water sample, bring it back to the lab, put it on a microscope, and literally count the number of algae cells.

It’s a tedious job, made difficult by the fact that there are non-toxic cells that resemble K. brevis.

But a company led by a University of South Florida researcher has come up with a new way to do that detection, in the field and in a matter of minutes.

John Paul is a distinguished professor with the College of Marine Science and chief executive officer of PureMolecular. He’s also the inventor of Red Tide Chek, which measures a specific molecular genetic assay for the red tide organism.

“We have designed specific small pieces of DNA called oligonucleotides, primers and something called a molecular beacon – a beacon gives out light and our beacons are florescent when they hit the target gene that they’re looking for,” Paul says.

That’s really scientific, so let’s go down the hall to the lab where Paul's former graduate student, PureMolecular chief technology officer Bob Ulrich, can explain it a little better. 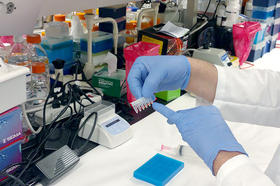 Ulrich starts by taking a small sample of water – anywhere between half a teaspoon and two tablespoons. He runs it though a short filtration process to extract the messenger RNA. Then he pulls out a foil packet containing a row of six connected plastic tubes, about an inch and a half wide and a half inch tall.

“With each individual (set of) tubes, there are specialized chemistries that are actually freeze-dried at the bottom of these tubes to make it simple for the layperson,” Ulrich explains.

Ulrich injects the RNA samples into the tubes, takes a battery-operated fluorometer, opens a door at the top of it, and slides the tubes inside. The fluorometer is a handheld device that uses light to excite specific molecules – in this case, the red tide assay.

Ulrich thumbs through a list of assays programmed into the device, picks K. brevis, and in a matter of minutes, results start to pop up on a graph on the screen.

“So once you see a blue line that has that fluorescence increase over time, you can see here it happens at about ten minutes for this sample," he says, motioning to the screen. "You know you have a positive detection event.”

And within a few more minutes, the device gives a cell concentration as well.

“Not only is there red tide or is there not red tide, we can actually determine within a margin of error whether it’s a low, medium or high bloom,” Ulrich says.

That information can then be quickly relayed to the proper authorities, who can then disseminate it to the public, public health officials and the fishing community.

The eventual goal is to put Red Tide Chek in the hands of monitors throughout Florida and other Gulf states – and because of the skill level involved, those monitors don’t need to be marine biologists. 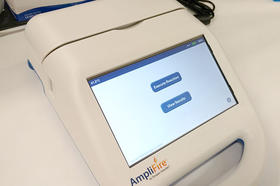 Already, volunteers from places like Mote Marine Lab, St. Petersburg College, and USF Sarasota-Manatee are being trained on how to use Red Tide Chek.

In addition, the Florida Fish and Wildlife Conservation Commission could really use the device as well.

“The FWC has an extremely aggressive program of monitoring where they go out maybe once or twice a week and have volunteers in boats and they sample around 1700 samples a year of what they call irregular sampling," Richard Paul says. "Then there’s opportunistic sampling if a bloom appears in a place where it hasn’t appeared before.”

And the technology isn’t limited to red tide. The first assay PureMolecular brought to market was GrouperChek, which distinguishes the seafood that restaurants and other dealers try to pass off as grouper from the real thing. Other seafood assays are in the works.

“We could do shrimp," Paul says. "Obviously you know it’s a shrimp, but people want to know if it’s a farm-raised shrimp or wild caught.”

And biomedical companies are interested in assays to detect other organisms as well.

Paul adds that this marketing of ideas - turning a concept in the lab into a product for the marketplace - is something that more universities want from their faculty.

“The old days was that if you published so many articles in arcane journals, or maybe they’re mainstream journals, that that was enough to secure tenure and you got a little bit of money and you kept your lab going," the thirty-plus year veteran researcher says. "But I think now boards of regents of universities want more for their investment, we have a responsibility to the community and they want to see jobs and economic growth as a result of research, and that’s been a challenge.”

He thanks USF officials for the assistance they've given him and his company, but he’s says he's finding out it’s a different world out of the lab.

“When you’re pursuing federal funding, there are panels and people who are deciding upon who’s going to get funded or not, but that money’s not coming out of their personal pockets," he says with a laugh. "That’s money that the federal government has set aside for certain programs. If you have an angel investor, you’re asking him to write a check.”

Right now, PureMolecular is literally just Paul and Ulrich, with some help from other USF Marine Science researchers and grad students. But they’ll soon move into lab space in the Bayfront Medical Center that puts them closer to potential customers: those biomedical companies clamoring for new assays.

“We as scientists can think we’ve made the greatest mousetrap in the world, and it turns out without having the application, it can be useless,” Paul says.

Despite a harmful algal bloom in 2015, Florida wildlife officials say the bay scallop population in Saint Joe Bay appears to be improving.

Red tied may have contributed to the deaths of 70 pelicans in St. Petersburg early this year, the Tampa Bay Times reports.

Florida's winter shrimp harvest in the Gulf of Mexico saw "a couple of bad months," fishermen say, on top of reports of low numbers for the iconic stone crab as well. That's all while a troublesome red tide has persisted since late last year.