A pair of physicians from the University of South Florida have returned to Tampa after a trip to Puerto Rico, but they're already looking forward to going back to help in the island's long-term recovery.

In addition to dropping off 500 pounds of medical supplies and treating patients during their five day visit last week, Dr. Asa Oxner and Dr. Elimarys Perez-Colon began setting up plans for their own future visits and those of other USF physicians, to places heavily damaged by Hurricanes Irma and Maria.

Oxner said, while major metropolitan areas like San Juan are recovering quicker, things remain dire in the remote parts of the island they visited.

"The urban areas are already a few months ahead, really, in terms of infrastructure, of where the rural areas are," Oxner told reporters Tuesday. "They're estimating it's going to take five to eight months to get water and electricity back up in the rural, mountainous areas of Puerto Rico."

Moving forward, those areas will be the ones USF physicians will focus most of their attention on. However, the lack of water, power and shelter means only a handful of physicians will go at a time.

"We would have to jump around from one house where they had running water so we could go to the bathroom there, then go stay at this other house because they had a free bed available, but then go and try to charge our phones at a third place because they had a generator," said Oxner.

She added that Puerto Rico's healthcare system has moved into the recovery phase, where they have doctors  - they just need to make sure the supply chain is ready to receive the equipment and medicine and get it to where it's needed.

"They have that basic infrastructure and so they're in a situation where they can receive these donations and actually distribute them to the correct places and they can ask for specific inventory from us," she said.

In particular, there's high demand for medicine for chronic diseases, like high blood pressure and diabetes.

Donald Mullins, the USF Health Director of Safety and Preparedness, was able to join a relief mission last week aboard a Boeing 737 leased by the Tampa Bay Rays. 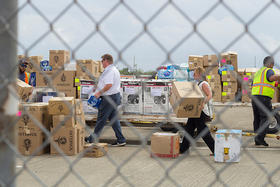 Mullins helped escort about 1,500 pounds of supplies, including insulin and prescription baby formula, as well as some basics, like acetaminophen and IV solutions.

But the demand, he added, will continue for some time.

"I saw a community that still needs people that care," said Mullins. "As life goes on here in the Tampa Bay region, for the people in Puerto Rico, they're still living this hurricane day-to-day, and they still need us to to continue to support them in ways in which we can."

Oxner said health officials in Puerto Rico are worried about long-term health effects, particularly due to the lack of clean water.

"Certainly contaminated water is already starting to spread some waterborne diseases, the big one is leptospirosis, which is spread from rats who are drinking the water and then the water is being shared by humans," said Oxner. "There are already between 10 to 15 cases that are reported, we don't know if there might be more in places where people don't have communication with us."

Oxner is concerned about cholera, but was not aware of any cases of that. She's also worried about Zika and other mosquito-borne diseases, because the insects are multiplying in standing water.

And while relief efforts continue, USF Health continues matching monetary donations from the public to help get the doctors and supplies to Puerto Rico.

As the doctors worry about the health of the people, USF also is working with Ponce Health Sciences University to determine if the medical school will need to send some of its students to Tampa to continue their education.

"In any type of emergency, conditions change," Mullins said. "Monday night, there was a heavy rain storm (at the school), so communication with that school stopped because they lost all internet and all cellular service."

"When things get better, they explore other options to stay in place and support their students, when they take a setback like Monday, things may have changed," he added. "We continue to be in a position to support them in anyway they choose."

As many as 240 Ponce students could come to USF. It's believed they'll be housed on the Tampa campus and use classroom and lab space on nights and weekends when USF students aren't using them. USF Health educators would also assist Ponce faculty and staff who would accompany the students.