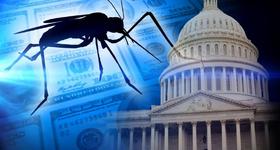 The U.S. Senate has again blocked a bill that would have provided funds to help combat the Zika virus.

On Tuesday, the bill that temporarily would have funded the federal government and also included Zika funding did not have enough votes to pass.

Republicans and Democrats have been negotiating for awhile now on certain provisions of the bill. That includes the GOP reversing a decision to defund Planned Parenthood.

But, Democrats also wanted funds to help address the water crisis in Flint, Michigan. Because it wasn’t included in the funding bill, they blocked the measure from moving forward.

Still, there were some Democrats who joined Republicans in voting for the bill. That included Florida Senator Bill Nelson, who says while Flint is important, the Zika virus was a priority for him.

The U.S. Senate announced Thursday that a bipartisan Zika funding deal has been struck and a vote could take place next week. But, in the meantime, Governor Rick Scott has authorized $25 million to go toward researching a vaccine to combat the Zika virus.

As Congress Inches Closer To Zika Funding Deal, Fla. Leaders Split On How To Get That Done

It’s good news to Florida’s Congressional Delegation and Governor Rick Scott that Congress could be close to striking a deal on funding efforts to combat the Zika virus. Florida just passed the 800 mark for the amount of cases reported to health officials. But, Florida leaders are a bit split on how that funding should be accomplished.

Could Congress be close to passing a Zika funding bill? A bipartisan group of Florida’s Congressional Delegation is calling that welcome news.

With 70 confirmed cases resulting from Florida mosquitoes carrying the Zika virus, Gov. Rick Scott traveled to Washington, D.C., on Tuesday to implore Congress to break a deadlock on federal funding to combat the disease, which can cause severe birth defects.

Congress is facing a September 30th deadline to make sure a budget deal is reached to fund the federal government. Lawmakers just came back from a seven-week break, and both the U.S. House and Senate have yet to reach an agreement on a bill to fund anti-Zika efforts—widely seen as a non-partisan issue. Governor Rick Scott is going Tuesday for a two-day trip to Washington D.C. to talk to members of Congress of the importance of that funding for Florida.