UMiami Doctors Report 'Cognitive Fog' Among U.S. Diplomats In Cuba – But Still No Cause

Ever since U.S. diplomats in Havana, Cuba, began complaining of mysterious illnesses two years ago, scientists have struggled to identify the cause. Doctors at the University of Miami released their own report on Wednesday – and it shows they’re still struggling.

In late 2016, about two dozen officials working at the U.S. embassy in Havana reported symptoms like hearing loss and migraines. They also said they’d experienced strange sonic blasts at their residences.

They were initially brought to the University of Miami's Miller School of Medicine for observation by a team of doctors. They reported their findings at UM’s Clinical Research Center – and said while they still don’t know what caused the diplomats’ illness, their tests confirmed something did happen to them in Cuba.

“We have incontrovertible objective evidence that they had an abnormality," said Dr. Michael Hoffer, another member of the UM team whose report is being published this week in conjunction with the University of Pittsburgh.

"What caused it; who did it; why it was done – we don’t know any of those things. I think it’s vexing for all Americans, all people around the world, that people can be harmed and not know why.” 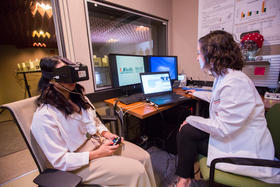 The UM findings contradict an earlier-released University of Pennsylvania study that found the diplomats suffered mild brain trauma. Hoffer said the disparity may result from the fact that UM observed the patients more immediately after they’d experienced whatever affected them in Cuba.

Theories abound about what happened to the diplomats – including concussive sound blasts or microwaves – as well as who was behind it. (Cuban communist hardliners and Russian agents are the most oft-mentioned suspects.) Cuba questions whether anything really harmed the diplomats, and it denies any role in the mystery, which has strained normalized relations with the U.S.

The U.S. State Department has sent "a number of individuals" from the U.S. Consulate in Guangzhou, China, back to the U.S. after screenings showed they may have been affected by mysterious health problems similar to what diplomats experienced in Cuba.

Doctors treating the U.S. Embassy victims of mysterious, invisible attacks in Cuba have discovered brain abnormalities as they search for clues to explain the hearing, vision, balance and memory damage, The Associated Press has learned.

It's the most specific finding to date about physical damage, showing that whatever it was that harmed the Americans, it led to perceptible changes in their brains. The finding is also one of several factors fueling growing skepticism that some kind of sonic weapon was involved.

Yoandri Pavot applied just in time for a visa under a recently scrapped U.S. policy that had long welcomed doctors from Cuba who defected while on assignment in third countries.