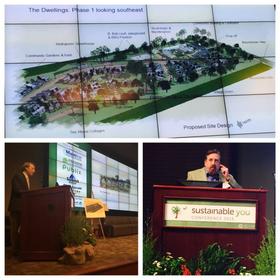 A proposed “Tiny House” community for low income people is a step closer to becoming reality, despite pushback from nearby residents. The issue has been mired in controversy over whether the proposed location is suitable for the project.

The county’s homeless shelter is named for local developer Rick Kearney. When it first opened two years ago, it was hailed a new beginning for the county’s beleaguered social services agency and a fresh start for the areas homeless shelter. But now, residents who live around the Kearney center say it’s brought many of the same problems to a new area: such as robberies, and loitering. That has now formed the backdrop for a different debate over another Kearney project:  The creation of a Tiny House community for low-income residents and people in transition.

“Was there no available land where you live?" One man asked Kearney during an April town hall meeting on the development in Blountstown.

More than 200 concerned residents came out to that meeting voicing what was largely opposition to Kearney’s project. Those objections largely overshadowed the few people who spoke in support of it. But Tuesday, more of the supporters had an opportunity to speak before the Leon County Commission. Former serviceman Tom Dursapolski was at that Blountstown meeting, and he also came to Tuesday’s public hearing on the issue.

“I feel like at one point in my life, I was a very likely candidate to participate in this housing opportunity," Dursapolski said.

The plan calls for the development of more than 20 homes with 130 units between 300 and 500 square feet. They would be located off Blountstown highway, near the Wolf Creek neighborhood. But the project has been weighed down with rumors about who—homeless residents, drug and sex offenders—will live there. Attorney Tim Perry is representing some of the homeowners and residents who would be affected by the proposed development.

“When you have a de-facto homeless shelter that’s operating in a residential community," said Perry. "that’s not consistent with the type of homes in that area…that’s completely different from anything in the county or the country, I can’t see how it can be said that it’s designed to be compatible…we respectfully request you deny the project."

Supporters of the project say it could help those investments while offering much-needed affordable housing Detractors say it will have an impact similar to what has happened with businesses and homes near the Kearney Center. Commissioner Bill Proctor says he understands residents’ concerns regarding impact on issues such as property values.. But he also says much of that is out of the commission's control. It voted Tuesday accept a ruling by an administrative judge that found the project was properly approved according to the county’s land use rules.

Communities across the country are implementing a 'Housing First' model as a new approach to fight homelessness. Some local officials want to bring the program to Leon County.