Florida’s Department of Environmental Protection used ground penetrating radar on several plots of land in a predominantly black section of Fort Myers this week. For decades the City of Fort Myers used one of the plots to dump lime sludge, a by-product of water a treatment plant. That lot is being tested, along with nearby private properties and water wells, after residents found out and became concerned.

A lot of the weeds in the lot are at least five feet high and it’s where the Florida Department of Environmental Protection is using ground-penetrating radar, or GPR, to find out what exactly lies beneath the soil.

The Department’s South Regulatory District Director Jon Iglehart was at the property on South Street. He said the plot of land was a borrow pit, essentially a big sandbox used to store materials like soil and gravel, that was eventually filled.

“We did some sampling. We think we know where the edges are pretty much from aerials from the fifties and sixties," said Iglehart. "This will allow us to hone in on where the boundaries are, where the fill is, how deep it is and if there’s anything in there besides lime sludge.”

The City of Fort Myers and the Department of Environmental Protection define lime sludge as a by-product of the lime-softening water treatment process. Lime is added to water to reduce hardness and reduce chemicals like calcium, magnesium, and arsenic.

And the city dumped that lime sludge on the lot between the 1950's and the 1990's. The concern is that people ingested and touched whatever chemical byproduct was there. Now, the city wants to find out exactly what was in that byproduct and if any other substances accumulated.

Before DEP geologists could use their ground-penetrating radar, which looks a lot like a lawn mower, they had to cut tall grass with a machete and move dumped car parts out of the way.

DEP geologist Clint Kromhout used the GPR to see beneath the earth.

“What this piece of equipment will be able to do is potentially show you where the area has been disturbed from excavation versus the natural soil levels that have been undisturbed. It could tell you where additional testing may be done," said Kromhout.  "It’s gonna tell you absolutely nothing about the content and the makeup of the soil.”

The GPR sends a radio signal down into the earth and measures the amount of time it takes for that signal to reflect off an object or layer and return to the receiver. 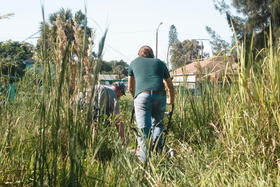 Ricky Rogers stood across the street, observing the testing. He lives down the block.

“I was born and raised over here, so I know about it," said Rogers. "But we didn’t know what it was. Played in it.”

The DEP’s Jon Iglehart said what happened here could change the way the department operates.

“As we’re looking back at how things played out here, it’s larger than Fort Myers at this point," he said. "It’s how the Department looks at these sites throughout the state of Florida.”

Meaning that it might be time to revisit the rules about notifying people of dumping that may be happening near their homes. Iglehart said the results of this day’s tests will be available in two weeks.

U.S. Senator Bill Nelson sent a letter to the U.S. Environmental Protection Agency's Administrator Scott Pruitt last week, calling for an investigation and for the site to be cleaned up.

If you live near the 3348 South Street Dumpsite and have a water well, you have until Aug. 17 to request testing.

The City of Fort Myers held a workshop this week to inform residents about what kind of testing will be done on a dump site in a predominantly black neighborhood.  Back in the 1960's, the City  dumped a byproduct from a water treatment plant in an empty lot in the neighborhood known as Dunbar. For decades, the city didn’t tell residents what that byproduct was. It included arsenic.

Not long after an investigative story appeared in the Fort Myers News Press, a “no trespassing” sign appeared on what was once considered public land in the heart of the Fort Myers’ Dunbar neighborhood.

That newspaper report found that the city dumped toxic sludge there 50 years ago, didn’t tell any of the neighbors, and haven’t cordoned off the area or cleaned it up.