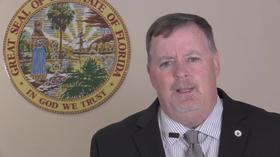 Mike Carroll, the Florida Department of Children and Families Secretary, says he wants to put the focus on four areas, including a look at the services his agency provides.

In recent years, the agency has fallen under scrutiny for a spate of child abuse deaths under its watch. And, the Florida Legislature has put in place a series of reforms that Carroll is tasked with implementing.

Among them is hiring more child protective investigators to help with the caseload as well as increasing the number of CPIs with social work backgrounds.

Jennifer, a child protective investigator, spoke in a DCF video about a day in the life of a CPI.

She says there are certain cases that you always remember. She recalled the case of an eight-year-old girl, who Jennifer says was a straight-A student as well as a sweet child.

“She disclosed a lot of, I would call it, torture as far as they would make her drink hot sauce and hold her nose and dump water on her head and make her go to bed wet and told her they hated her. We ended up removing her and her little brother, and they’re now in foster care. And, what I found shocking about her was even though they had done this to her, she still loved them and still wanted to see them,” added Jennifer.

A similar story in the 2011 case of Nubia and her twin brother Victor Barahona has haunted the agency. There’s even a claims bill seeking the rest of the money owed to Victor, who was the only one of the two siblings to survive the abuse of their adopted parents. Their mistreatment included having their eyes glued shut after hot sauce was put in their eyes as well as beatings and forced to eat feces—red flags, that at the time, were ignored by DCF.

Since Governor Rick Scott’s first term, Carroll is now the third Secretary to take over the agency.

Carroll says DCF must do better in all the services offered, and identified what he calls four core competencies. Those include working better with outside vendors who provide most of the department’s contracted services as well as stakeholders, getting better at managing data, and make sure there are qualified people working for his agency.

A man accused of throwing his daughter off a bridge has been found incompetent to stand trial in her death.

John Jonchuck appeared in court Tuesday. The case has been reset for a status check on Feb. 17.

If the court rules in line with the doctors' reports, Jonchuck would likely be sent to a hospital for six months before his case returns to court for another status check.

Jonchuck was arrested Jan. 8 after authorities said he dropped 5-year-old Phoebe more than 60 feet off a bridge.

He has a history of mental health issues.

Police in South Florida say an 11-month-old baby died after being left inside a sport utility vehicle parked outside an apartment near Fort Lauderdale.

It is the third Florida child to die after being left in a vehicle this year, according to KidsAndCars.org.  Nationwide, nine children have died from vehicular heatstroke deaths in 2015.

The country’s largest auto club is making it easier for Florida parents to comply with a revamped child car seat law.

As of the New Year, state law now requires that children need to be secured in car-safety seats until the age of six.  Previously, kids could transition to regular adult seat belts as young as age four.

Each Friday, throughout the month of January, AAA will be giving away free booster car seats.

The House Children, Families and Seniors Subcommittee unanimously approved a bill (PCB FCSS 15-02) that would tweak the new law, which passed after a series of child deaths due to abuse and neglect.