Ignited by the deadly shooting in Parkland, tens of thousands of Tampa Bay area teenagers plan to demonstrate for gun reform on Saturday. Beyond making a statement, many of the students hope to register and mobilize young people to vote.

Listen
Listening...
/
Sparked by the deadly shooting in Parkland, Tens of thousands of teenagers plan to demonstrate gun reform around the Tampa Bay area on Saturday. WUSF's Tim Fanning says that beyond making a statement, many of the students hope to make political change by registering and mobilizing young people to vote.

A senior at Tampa’s Plant High School, Shapiro said students are taught civics too early in their education.

“We are taught about voting for one semester of freshman year when we’re just trying to find the ropes of high school,” she said. “Now in senior year, many of us don’t know what to do. There is so much ambiguity about the voting process, that I think it discourages young people from voting. We hope to really communicate that with our younger audience Saturday. 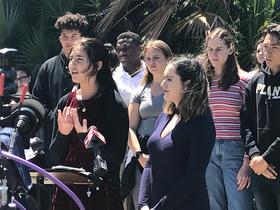 There will be speeches centered around voting and a congressman will be on hand to educate students. At the demonstration, organizers will encourage voter registration and will preregister 16-year-old voters.

“We’re going to keep the conversation going that voting is essential,” Lavender said.

More than 800 March for Our Lives demonstrations are planned around the world Saturday, sparked by the deadly Valentines Day shooting at Marjory Stoneman Douglas High School, according to the Associated Press.

Locally, students from over than 50 schools will participate in area schools, including Hillsborough, Pinellas and Pasco. Similar demonstrations are taking place in Lakeland, St. Petersburg, Bradenton and Sarasota.

In Tampa, organizers said they expect about 5,000 protesters at the event. The demonstration will take place in Kiley Garden, an elevated portion of Curtis Hixon Park.

There be a rounds of speeches and then demonstrators will march over Kennedy Boulevard bridge, around the University of Tampa and over the Cass Street bridge, ending in the Poe Parking Garage.

Among other things, the legislation raised the legal age for gun purchases to 21, and created a waiting period of three days, and allowed for the arming of school personnel who are not full-time teachers.

But for Shapiro, those changes aren’t enough.

Lavender said they are not against the Second Amendment right to bear arms, or anyone's right to own a weapon for self-defense. But they want reasonable nationwide restrictions added, such as the ban on "bump stocks," devices that can speed up the rate of fire on semiautomatic rifles.

After the march, organizers hope to continue educating fellow students about the political process and to advocate for safe gun reform on a nationwide scale.

Almost immediately after the shooting at Marjory Stoneman Douglas High School, Melissa Kornhaus, a licensed mental health counselor with a specialty in trauma therapy, was looking for a way to help.