Things are a bit quieter at the state capital, now that the year's legislative session is over. Many bills were left on the table, as always happens, but one that made it is being cheered by numerous environmental groups.

It's Senate Bill 10, the bill that creates a massive reservoir south of Lake Okeechobee. 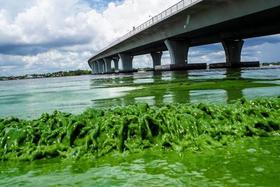 It was one of the key bills from Senate President Joe Negron, R-Stuart. His area was hard hit by the blue-green algae that crippled parts of Florida's east and west coasts last year after tons of water had to be released from Lake Okeechobee down the St. Lucie and Caloosahatchee estuaries.

The bill was one of eleven bills signed late Tuesday by Governor Rick Scott.

It gives the state the ability to borrow $800 million for half the cost of the reservoir. The rest will be on the federal tab. One of the groups happy with the success of the bill is the Everglades Foundation. CEO Eric Eikenberg calls this a momentous success.

Listen
Listening...
/
Everglades Foundation CEO Eric Eikenberg says the reservoir south of Lake Okeechobee will be a huge step toward restoring the everglades and protecting against those blue/green algae blooms.

Here are highlights of our conversation with Eikenberg:

EIKENBERG: Well, I say it's momentous because 17 years ago the United States Congress passed the historic Everglades Restoration Plan. And when that legislation passed the Congress and was signed by the president, the second project that was authorized was a reservoir in the Everglades agricultural area. So the reason why we're so pleased and optimistic going forward is it took 17 years to get to this point where we are now. It is momentous — it's been 17 years in the waiting.

WLRN: Still, the federal government has to foot its part of the bill. What makes you confident that there's not going to be any problem with that?

The state has to go first in order for Everglades restoration projects to be successful. The state of Florida has to go out and buy the land. The state has to put the money up first in order to get these projects moving. Once the land is identified, once the project has been designed, then the United States Congress begins to send the money down to Florida. And that's been the case over these last 17 years. So Washington, despite the changes from Democrat to Republican to Democrat to Republican administrations in the White House, one thing that has been common over the last 17 years is the federal government puts up its share of Everglades dollars and there's no doubt that they will continue to do so.

Briefly describe for us what exactly this reservoir is going to do.

Once this reservoir is built we’ll have increased storage south of the lake. So when Lake Okeechobee rises, the Army Corps, instead of dumping this water east and west, they can store it south of the lake. You then place this water in 60,000 acres of manmade wetland filtration marshes south of those sugar fields so that pollution can be removed from the water and then you're delivering clean fresh water through the Everglades down into Florida Bay and the Florida Keys, the more natural way water is supposed to move on the peninsula. That's what this reservoir does.

We have to wait for federal funding and the Army Corps of Engineers and the Water Management District have to come together on the plan. So again it could be a waiting game, in the meanwhile we may have other algae blooms. Is there a concern about that?

I also need to point out that without Senate Bill 10, the way it stands right now, the state of Florida and the Army Corps of Engineers are not going to even talk about this project until the year 2021. That's another four years away from just starting to plan for it, and then that takes a couple of years. So under the current timeline you're about eight-to-10-to-12 years away from this reservoir coming on line. What [state Senate]President Negron has done and what the governor will do by signing this legislation is it moves that process up. It continues this sense of urgency. And let's get this reservoir built using state lands over the next handful of years.

The U.S. Sugar Corp. had a problem with the original plans because agricultural land would have been purchased for the reservoir. We did invite them to join us but they just sent us a statement, they said: “Senate Bill 10 has been greatly improved, takes essentially no privately owned farmland, it even removes the threat of eminent domain.” So it sounds like this has been the project that a lot of groups can get behind, formerly groups that were opposed to each other. Why has the solution taken so long to get to this? 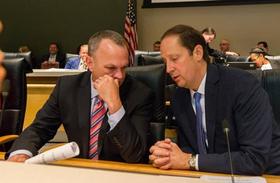 There were so many people that told us over these last nine months that this could not be done, that big sugar was going to stand in the way. And I will say that Joe Negron put his political capital on the line, leading this effort in the Florida Legislature, having hundreds of fishermen, boaters, small business owners, realtors, people that make a living off of our waterways, travel to Tallahassee to speak before legislative committees, demand action, demand that this project become a reality. It wasn't special interest that dominated this issue. In fact, special interest was kicked to the curb and instead real Floridians stepped forward and said no more toxic algae, no more threats to human health, no more impacts to our economy. This is 17 years in the making. It's our water supply, the Everglades. Let's get it done. And we're delighted that the Legislature stood up and took action.

What’s the next issue to begin fighting for?

It’s great to get a piece of legislation passed. It's great to have the governor sign the bill and put it into law. But as you know it now needs to be implemented. This doesn't divide Democrats or Republicans; it brings them together. It is the source of our water. It is our economic engine. We're more optimistic today that this issue is at the forefront and we're going to see positive outcomes. But people cannot let up. They need to continue to tell their elected officials why this is so critical. And then there will be a day when we celebrate, but we have a tremendous amount more to do.

There are still CERP (the Comprehensive Everglades Restoration Plan) projects that have not gotten started yet. Actually, of the 68 projects planned under CERP, only six are underway. You can learn more in our series called River of Grass, Dying of Thirst.

Governor Rick Scott is approving a 1.5 billion-dollar reservoir South of Lake Okeechobee, much to the delight of Senate President Joe Negron.

U.S. Rep. Brian Mast has unveiled a proposal that would speed up the completion of Everglades restoration projects, including a massive reservoir system south of Lake Okeechobee approved by the Florida Legislature this year.

Gov. Rick Scott will sign a bill that includes money to speed construction of a reservoir south of Lake Okeechobee — a top priority of Senate President Joe Negron, R-Stuart.

Florida Gov. Rick Scott for the first time said that he supports having the state acquire land to build a reservoir system south of Lake Okeechobee to help battle toxic algal blooms.