Gun rights advocates say they could gain more from a pending Florida Supreme Court case than controversial open-carry legislation that failed this year. 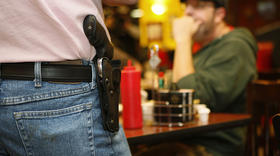 Justices have set oral arguments for June 8 in a case called Norman vs the State of Florida. In it, a Fort Pierce man is challenging his 2012 misdemeanor conviction for openly carrying his handgun.

If the court strikes down Florida’s open-carry ban, then any law abiding citizen could openly carry a gun, says Florida Carry attorney Eric Friday.  The open-carry proposals that stalled this year in the Legislature only benefitted concealed weapons permit holders.

“We could potentially get in Norman even more than the Legislature was willing to give us.”

Whether a liberal-leaning court will allow that to happen remains to be seen.

Comras told the Fourth District Court of Appeal that keeping guns out of sight is more calming for the public.

Friday’s client, Dale Norman, was thrown to the ground and handcuffed in 2012 after a bystander spotted his gun and called police. Norman had a concealed weapons permit and a clean record, Friday says.

A jury found Norman guilty of a second-degree misdemeanor and he was ordered to pay a fine, Friday says.

Update:  The House passed both open carry and campus carry. But both bills face slim chances in the Senate.

The Florida House is expected to vote Wednesday to allow people with concealed-weapons licenses to openly carry sidearms in most public places.

And in preparing the bill late Tuesday for a final vote, the House voted 72-43 to tack on an amendment that would let lawmakers with concealed-carry licenses pack heat during legislative meetings and on the House floor.

Lawmaker Files "Show Me Your Papers" Bill For Guns

While Florida Republicans push measures allowing concealed weapons on college campuses and open carry throughout the state, a Democratic senator wants permit holders to have their papers ready for first responders.