The Sunshine Economy: One Year After Irma

The White Sands Inn is owned by Rachel Stephens and her mom. It has seven rooms, plus a manager's apartment. The two also own a house next door that has two units available for weekly rentals. Stephens has three employees, including herself.

Hawks Cay reopened in late August after a $50 million renovation. Work continues on The White Sands Inn. Stephens hopes to have a few rooms ready this fall.

Rachel Stephens learned she was pregnant while she was on her way back to the Keys after evacuating for Hurricane Irma. "The daughter was a surprise," she says. "We've been trying for a while. Apparently she's a hurricane baby."

The rebuilding has been slow. They've replaced and torn off the roof of the main hotel twice. It's a two-story, concrete block building that sits 100 yards off the Overseas Highway and was surrounded by sand. Irma blew the sand away. Two rooms facing south are just 15 feet from the ocean’s edge. "According to the engineer for the flood insurance company, they decided that the waves through here were nine to 10 feet high," Stephens says. 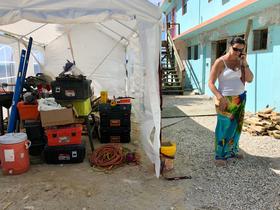 There have been visits by real estate agents and potential buyers. Stephens and her mom have owned the hotel for 19 years. Despite the damage caused by the storm, property values in the Keys have not weakened. Still, Stephens is rebuilding, not selling.

"We didn't feel we could get what we wanted to get out of the property," she says. "So we decided that we will rebuild it and make our paradise better. In my head we were always going to stay."

Her new daughter also has provided the motivation to stay. Stephens had to travel to Miami each week during her pregnancy for doctors appointments. "Without her happening, I think that we would have had a harder time."

With no guests, there has been no income from the hotel. Stephens says they have been "nickel and diming off the insurance money to survive."

She works part-time tending bar elsewhere in the Middle Keys. It helps bring in some income and gives her a perspective on the tourism industry, which she is banking on when the hotel is fixed up.

A lesson from the storm for Stephens is to accept help. Despite having no hotel guests and no income, and despite many of her neighbors dealing with their own challenges after Irma, she says the community rallied to hold three baby showers for her. "It's easy to give, but when someone gives back to you, it's really hard to accept."

Stephens had her daughter in late May. She brought her home on June 1, the first day of hurricane season.

And, no, her name is not Irma.

Hurricane Irma deposited a 39 foot boat into the lagoon at Hawks Cay Resort. The winds and storm surge swamped the property on Duck Key, which lies right on the Atlantic, guest rooms and pool just feet from the ocean. A lagoon is part of it. 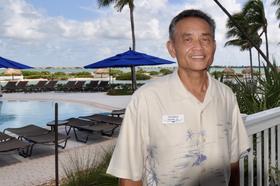 Irma cost the hotel 11 months of business. It cost the Keys hundreds of jobs. In the first six months of this year, the closing of Hawks Cay meant a loss of about $30 million in revenue, according to a federal financial filing of the resort’s parent company, Carey Watermark Investors.

"The pool was entirely black," says Hawks Cay Managing Director Sheldon Suga. "It had filled with debris and salt water. We had trees down. I don't think there was anything green out here at all," he says from the pool deck.

The resort reopened Aug. 30 after a $50 million renovation. And it is hiring.

Like a lot of businesses in the Keys, Hawks Cay has had a tough time finding workers. Hurricane Irma cost a lot of people their homes. Some who left for the storm never came back. Others returned only to leave again.

Monroe County has one of the lowest unemployment rates among Florida counties -- just 3.2 percent in July. That’s actually higher than before Irma. There are fewer people in the workforce in the Keys compared to before the storm. The labor force in Monroe County was 11 percent smaller this past July versus a year earlier. It is the biggest percentage drop in the workforce among Florida counties. And it represents more than 5,400 fewer people who are available and interested in working in the Keys.

The resort laid off almost its entire staff six weeks after the storm. They had been paid and benefits were covered during those weeks, but Suga says it didn’t financially make sense to continue. Now, the resort is offering bonuses to workers if they help attract another person to come work there.

"We've created an incentive of rewarding someone who finds someone to work here. And for the people they find, we're also going to put them on an incentive to stay." If a current Hawks Cay hourly worker helps bring someone else to the resort, the current employee gets $500, providing the new employee stays for six months.

Rebuilding The Florida Keys One Year After Irma

Monroe County is waiting for $90 million of federal money promised to help rebuild and repair damage after Hurricane Irma and help better protect the Keys from future storms.

St. Johns County and the City of Jacksonville Beach will be getting more money from the federal government to help with clean-up costs associated with Hurricane Irma last September.

FEMA: $3B Dished Out To Florida For Hurricane Irma

It's been almost a year since Hurricane Irma impacted Central Florida in mid-September - but the damage it did is still being calculated.

Hurricane Irma cost Florida's fishing industries almost $200 million, according to a damage assessment released by the state and federal governments.