Odalys Arevalo works out of a shopping mall but she doesn't sell clothes or electronics or jewelry. She sells health insurance. And when it comes to the Affordable Care Act, she and her team of 600 brokers sell a lot of it.

Arevalo is co-founder of Sunshine Life and Health Advisors. The idea for the company began in a coffee shop. Operations started with a single mall kiosk and now the firm has eight outlets, including a 24,000 square feet "store" at the Mall of the Americas in Miami-Dade County.

She expects to sign up 90,000 people for insurance plans through Healthcare.gov during the open enrollment period for Obamacare, which runs through February 15. That's a 50-percent increase from the business the company did during the first year of Obamacare, though it's less than Arevalo first projected.

"It has not been as anticipated because there are a lot of other places open. We have not had the wave that we expected," she said. Arevalo quickly added, "We believe it's coming, though." 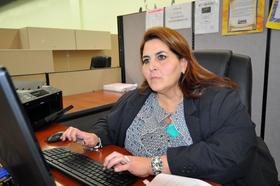 Florida is big for Obamacare. Through January 23, more than 1.3 million people in the state had signed up for health insurance through the law. Almost one in five Americans getting health coverage via Healthcare.gov or the Spanish language version, CuidadodeSalud.gov, is in Florida. It's the only state among the 37 using the federal government's website to have over 1 million enrollees.

Thousands of those are in South Florida. Hialeah, Fort Lauderdale, west Miami, Little Havana, Pompano Beach, Hollywood, Kendall all appear in the top 35 areas of Obamacare enrollees.  The top 38 zip codes for Obamacare sign-ups in Florida are in South Florida. In those areas alone there are more than 265,000 people enrolling in a health insurance plan.

Here's what sign-ups look like across the state of Florida by zip code:

Kiwami Livingston is one of those enrollees in South Florida. He tired to sign-up during the first year of Obamacare but he couldn't do it through Healthcare.gov and missed the open enrollment period. This time, he will pay about $350 per month for his premium.

More than 9 out of 10 Floridians utilizing the Affordable Care Care qualify for a subsidy but not Livingston. He's a 34-year-old web developer and makes too much money to get a break on his individual policy premium through the government's website.

Jersey Garcia was able to get coverage last year through Healthcare.gov and she didn't get any subsidy either. She didn't earn enough money to quality for a tax credit on her premium but earned too much to qualify for Medicaid. She was working as a freelancer at the time and bought the cheapest policy she could: $165 per month.

She tried to use the policy for a physical but the only doctor near her home and in the policy's network didn't have an appointment for three weeks. She had the policy for three months before getting a full-time job with health benefits. But during her Obamacare experience, the cost of her plan led her to cut her grocery and gas budget to pay her health insurance premium.

Florida's large pool of young and uninsured people, especially Hispanics, is a key to the longer term of goal of the Affordable Care Act -- to reduce the pace of rising health care costs. The Kaiser Family Foundation estimates 51 percent of the potential customer base for the ACA insurance marketplace in Florida have signed up.

Average costs hikes for 2015 are below 10 percent for ACA plans nationwide, though some locations and plans have seen higher rate increases. The Health Research Institute of PriceWaterhouseCoopers found 2015 premium increases ranging from down 11 percent to up almost 20 percent in Florida.

What a difference a year makes.

With its technical troubles largely behind it, Healthcare.gov enrolled 1.9 million new customers for health insurance between Nov. 15 and Dec. 18.

Florida by far led the nation in that enrollment, with 673,255 people selecting plans on Healthcare.gov. That’s nearly double the signups in Texas, the other large state using the federally run marketplace.

Florida continues to lead every other state using the federal marketplace health insurance marketplace, with just over 1.3 million who were enrolled or were automatically re-enrolled in a health plan as of Jan. 23.

The high numbers are due to high demand, federal health officials say.

Vet Workers May Be Exempt From ACA Rule

In a rare show of bipartisanship over President Barack Obama's health care law, a Senate committee voted unanimously Wednesday to exclude veterans from the 50-worker threshold that triggers required coverage for employees under that statute.

The Senate Finance Committee vote was 26-0, a departure from the usual party-line fights over Obama's showcase 2010 law.

Free Clinics Beat Insurance, for Some

With open enrollment for health insurance ending in just two weeks, the push is on to get everyone who qualifies signed up. But some of the uninsured are balking, and it’s not only the so-called “young invincibles” who think they don’t need it.

Gary Babcock of Clearwater, for example, is neither young nor invincible.  He’s 55, with diabetes so severe he has to give himself daily insulin shots.

At his income level, he could choose from several Affordable Care Act plans with no premium, fully subsidized.