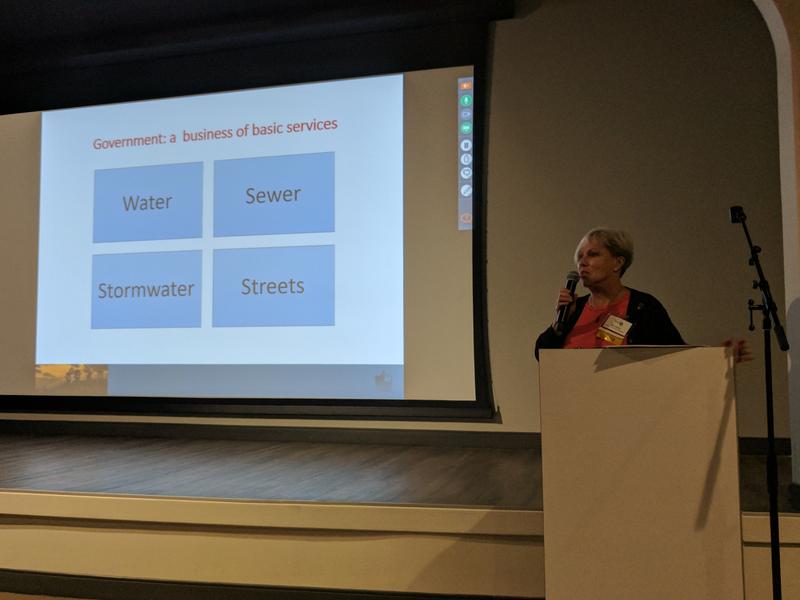 She argues the most effective strategy for spurring action to fight sea-level rise is making the business case. And, the Democratic mayor of the nation’s oldest city said in her experience, steering clear of the term “climate change” helps keep politics from getting in the way of policy.

“The minute you go there, you aren’t able to focus on the issues at hand, which are really, ‘What is it that we do to adapt and to build a new?’” She said.

Shaver has been a vocal advocate for resiliency planning, even becoming vice chair of the nascent organization Resiliency Florida. The group’s mission is connecting local politicians and businesses to combat rising tides and worsening storm surges.

After President Donald Trump recently backed out of the international Paris Accord aimed at reducing carbon emissions, dozens of U.S. cities have symbolically declared support for the agreement.

“We’re kind of a practical city. We take positions that really are ones we can put some teeth into. In terms of how we act as a city, we don’t really have a program around CO2,” she said. “We don’t do those things.”

Instead, Shaver says she’s interested in getting buy-in from businesses to find “free-market solutions” to help her city adapt to rising seas.

Development and sea level rise are two things Miami is known for. And they go hand-in-hand, as developers and local officials plan how to make buildings resilient against water that could rise three to six feet by 2100.

Scientists from around the globe agree that the Earth’s climate is changing. The impact of that changing climate, how fast those impacts will be felt, and what residents in a coastal state like Florida can expect are more difficult to describe.

Harvard University wants to study impacts of sea level rise in Southwest Florida-- Collier County, in particular. This was proposed during a climate change meeting at Florida Gulf Coast University on Monday.

In the next 50 years, climate change researchers say sea levels could rise by five to six inches. Those inches pose a threat not only to homes and buildings, but to the natural barriers that have protected Florida's coasts throughout human history. A combination of a warming planet and rising seas could drive more severe storm surges that wipe out barriers islands and flood coastal areas. That's why researchers and planners in the Estero Bay region are taking steps now to build climate change resilience and adaptations into their plans, which are being shared at the Cela Tega conference series on the FGCU campus on Monday, Dec. 12.