A coalition of southeast Florida counties is leading the state in responding to vulnerabilities caused by climate change and sea-level rise, according to state environmental leaders.

"I really want to congratulate this group on the amazing work you've done -- and really the national and international example you are -- for partnership, for natural resource management, for talking about climate change, and for working on adaptation, resilience and mitigation," he said. "Thank you."

Read more: From Traffic To Sea-Level Rise, South Florida Has Many 'Resilience' Issues. Here's What That Means.

Valenstein was among several speakers from outside Southeast Florida who said the region is setting an example of how to respond to the changing climate: with collaboration. For the past 10 years, the four counties have worked together on sea-level rise, rising temperatures, stronger storms and other regional challenges in an agreement called the Southeast Florida Regional Climate Change Compact. They've earned presidential recognition and inspired the creation of the Tampa Bay Regional Resiliency Coalition, which launched earlier this month and brings together more than two dozen municipalities. 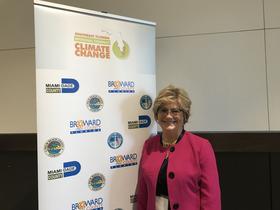 "It's the local governments that are the grownups in the room," said Pinellas County Commissioner Janet Long, who helped kick off the Tampa Bay coalition. She said organizers found inspiration in how the Southeast Florida planners "worked together to get it done. With partners, you do more."

It may sound kumbaya-ish to propose collaboration as a response to rising seas, hotter temperatures and other climate-related problems, such as hurricane preparedness or heavy traffic that exacerbates greenhouse gas emissions. But working cooperatively can both expedite progress and bring in extra funds, said Susan Glickman, Florida director of the Southern Alliance for Clean Energy.

"Members of Congress have said, if you'd work regionally, you'd have a better shot of bringing resources down," she said. That's particularly true for transportation projects, which tend to stretch across city and county lines and often are eligible for grant funding from the federal government.

Valenstein, the state environmental protection secretary, said the energy he sees in the climate compact among Broward, Miami-Dade, Monroe and Palm Beach counties has inspired him to encourage collaboration among the more than 3,000 employees who make up the Department of Environmental Protection. The department recently began offering leadership training classes to its employees; Valenstein said it's also increasing outreach to businesses, non-profits and other environmental stakeholders. The ultimate goal is to help public servants and private citizens alike feel empowered as the state tries to respond to environment and resilience challenges.

"Whether you’re working on sea-level rise, climate change, water quality, protecting lands -- it is all interrelated," Valenstein said. "It really comes back to seeing progress from partnerships."

Hurricanes, Rising Seas May Someday Force Florida Communities To Move. Can We Learn From Louisiana?

Mark Schleifstein is a Pulitzer-winning environment reporter with NOLA.com and the Times-Picayune in New Orleans. He attended high school in Miami. Schleifstein spoke with WLRN’s Kate Stein about the future of both places -- and about a community that’s already had to move away from the coast because of rising seas.

Everglades restoration needs to do more to account for climate change.

That’s the headline of a report released Wednesday by a Congressionally-appointed committee of scientists.

The report from the National Academies of Sciences, Engineering and Medicine says agencies involved in restoration need to do more analysis of how sea-level rise and increasing rainfall impact Everglades projects.

Miami's mayor is joining a list of big names on a new international climate change commission.

The commission includes 28 leaders from government, business and non-profits. They represent countries including the Marshall Islands -- one of the nations most at risk of having to relocate because of sea-level rise.

What Did Climate Change Have To Do With Hurricane Michael's Strength? It's Complicated

Hurricane Michael approached Florida with ferocious speed this week, hitting the Panhandle as a Category 4 hurricane and leaving behind a trail of catastrophic damage. The storm went from a depression to a serious storm in less than a week.

According to the National Hurricane Center, Michael was the strongest hurricane to make landfall in the continental U.S. since Hurricane Andrew in 1992.