As Some Hope For Bipartisanship, Gun Safety Bills Causing Divide Within Political Parties 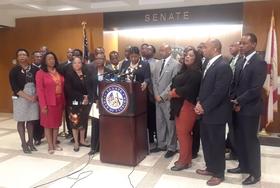 With about a week left of the 2018 legislative session, lawmakers are facing increased pressure to pass gun safety legislation—in response to last month’s mass school shooting at Marjory Stoneman Douglas. But, the process is pitting people within the same parties against one another.

In the last week or so, lawmakers on both sides of the aisle have clashed over what they’d like to see in the gun safety proposals. It includes things like a ban on bump stocks and raising the minimum age to 21 for a person to buy any firearm.

It’s provisions like that, that caused Rep. Jay Fant (R-Jacksonville) to try and strip “gun control” language from the House bill. He says the bill infringes on Floridians’ Second Amendment rights.

“This level of infringement upon our most sacred and highest regarded law is tremendously out of place in a package, which contains many practical approaches to defending students,” he said, during Tuesday's House Appropriations Committee hearing.. “I have an oath and I bring this amendment to you, so that we do not get bogged down in a constitutional discussion, debate, argument, what have you. Instead, let’s focus on the more positive pieces of the legislation proposed.”

But, his amendment failed. Meanwhile, both the House and Senate bills include a plan that could allow designated teachers to carry firearms, if they are deputized and complete law enforcement training.

“It is the final line of defense when everything else we should have in place as a society has failed, as it did in this case,” he said. “Those teachers, those coaches—who threw themselves in the line of fire—if they could  have had a way to defend themselves and their students, I think they would have wanted that. And, so, it’s really just the last line of defense.”

Corcoran says he recently spoke to Parkland shooting survivors about what he calls the benefits of the “school marshal” program.

“What I said to the kids is, ‘here is what they all have in common. All of these shooters are just abject, complete, and utter cowards. And, here’s what a coward doesn’t want to do: stare down a marshal with a gun the second he goes through the door,’” he added. “I think it changes the behavior tremendously.”

As for Rep. Edwards-Walpole, she says it’s time for all sides to put aside their differences and come together on this issue.

“So, I appreciate the inclusion from the majority,” she said, during Tuesday's House Appropriations Committee hearing. “I thank you for working and continuing to work with all of the members, especially of the minority members to incorporate our concerns and our suggestions, and I would just ask that going forward that those individuals who can’t get with it and be a part of this bipartisan compromise and work toward a solution, get the hell out of the way!”

But, the black legislative caucus has said the gun safety bill—in its current form—is not something they can get behind—because of the “arming teachers” provision.

Some talked about what this legislation could do to minority students, such as Rep. Kamia Brown (D-Ocoee).

“While a vast majority of our teachers are wonderful people, there could be situations where guns are used against minority students because a teachers says he or she fears for their life, and the safety of others. In this bill, there is no exception to the already law—Stand Your Ground, included,” she said. “Teachers authorized to carry as part of this marshal program will be able to stand their ground, when they are threatened by ay student, not just an active shooter and avoid civil and criminal liability.”

Meanwhile, on Thursday, Governor Rick Scott spoke on the floor to House and Senate lawmakers about the importance of passing gun reform in the 2018 legislative session.

“As you all know, two weeks ago, Florida changed,” he said. “17 people that didn’t deserve to die, died. It’s horrible that this could ever happen anywhere, and when you talk to the families you just can’t imagine what they’re going through.”

Scott later introduced Ryan Petty and his son Patrick—one of the 17 families who lost a loved one in the high school shooting: his 14-year-old daughter Alaina.

“No parent should have to feel the way that my wife and I feel as well as the 16 other families,” said Petty. “This time must be different. We have an opportunity to make some changes that will protect our kids in their schools and make them feel safe and make our schools safe.”

Petty says he wants lawmakers to put politics aside and pass Governor Rick Scott’s proposal. It does include some differences from the House and Senate bills—like not arming teachers.

After Years Of Dejection, Proponents Of Gun Laws See Hope

The progression has become numbingly repetitive — mass bloodshed unleashed by a gunman, followed by the stories of the fallen, the funerals, the mourning, the talking heads and the calls for change that dwindle into nothingness.