Solar Farm In East Pasco Given The Green Light

Members of the Pasco County Planning Commission on Monday approved a $75 million solar farm to be built on land previously zoned for agricultural use near Dade City.

The solar plant, which will add around 50 megawatts to the power grid by the end of the year, is part of an $850 million plan by Tampa Electric to create 10 solar plants by 2021.

Sen. Wilton Simpson, R-Trilby, and his wife, Kathy, own 252 acres in the vicinity of Blanton Road. The Simpsons bought the land from Well Fargo’s real estate arm for $1.5 million in 2016.

Several residents living near the area opposed the plan, saying they wanted to preserve the landscape of more than 300 acres of rolling hills.

“We have a northeast rural area plan that should’ve said that this wasn’t quite the place for it because it continually talks about saving the view sheds and the unique area,” Hazelwood said. “We actually have hills, which is a bit unusual for Florida, and they’re putting (the solar panels) on top of the hills.” 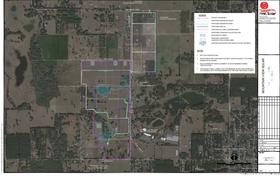 TECO spokesperson Cherie Jacobs told WUSF  the company took both location and access to the power grid into consideration when choosing the East Pasco site. She said the plant will not stand out more than a one-story building.

"Tampa Electric is committed to being a good neighbor," Jacobs said. "These solar plants produce no noise, no pollution and they don't use additional water."

Hazelwood noted that the commissioners meeting took place in New Port Richey, instead of Dade City, which is much closer to the property.

“In fact, (Dade City) is 10 minutes away. Whereas it was in New Port Richey, which is an hour away,” Hazelwood said. “We asked quite a few times for it to be moved to Dade City, but it never was. We still had quite a few people there, and a lot of people wanted to speak on a lot of different subjects.”

Hazelwood questioned why the plant could not be built in an industrial area next to to the Withlacoochee River.

“It is not that we are against growth or solar cells,” Hazelwood said. “There is an area within five miles that’s industrial and there are no people around it. Whereas here, you have about 30 people rebutting it.”

Hazelwood said that she had hoped there would have been an outcome in which both parties were content with.

“I’m obviously very, very disappointed,” Hazelwood said. “I had hopes of working with the county to find some type of median where large landowners make money and we’re happy with the results also, so that we still have a northeast rural area plan, but apparently this is not going to happen.”

JEA has rolled out a new incentive package to encourage residential adoption of battery storage for rooftop solar panels or other renewable energy systems.

New Solar Plants Will Pay For Themselves, FPL Says

Florida Power and Light announced Monday that it plans to build eight solar generators by early 2018. The plants will increase the company's solar capacity to nearly 1000 megawatts.