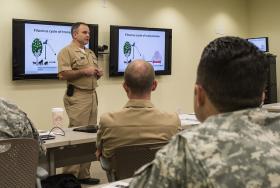 Six people who recently traveled from Ebola-affected regions are under twice-daily monitoring by the Florida Health Department. The state continues preparing in case someone tests positive.

Listen
Listening...
/
Hear the radio version of the story

No cases of Ebola have been confirmed in Florida, and all six of the people being monitored are considered low-risk. Gov. Rick Scott says just under 100 hospitals have completed special Ebola training, and he hopes more will do so.

“We have also continued to request the CDC to provide 30 additional testing kits to cover all of Florida’s public hospitals," he says. "Today the CDC has only provided three."

Scott briefed the state Senate during a conference call Tuesday. The governor also says a Florida National Guard unit has been trained as a rapid response team in case of an outbreak, and an additional unit is going to be trained soon. He says the state is also pushing the federal government to screen passengers at its international airports.