Sinkoles, Sewage And Wastewater Fights Cause Environmental Outrage In Florida 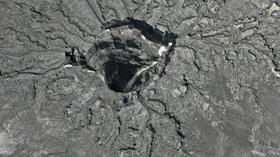 A massive sinkhole under a phosphate plant in Central Florida is dumping millions of gallons of contaminated water into the ground. West in Tampa, that city’s mayor is facing questions about his handling of a sewage spill into the bay. And in North Florida, a fight over a proposed wastewater pipeline, has surrounding counties picking sides.

Florida is surrounded on three sides by water. And its tourism-based economy depends on sparkly beaches and pretty waves. So when there’s a water-based crisis anywhere in the state, it gets a lot of attention. And the emergence of a giant sinkhole at a Central Florida phosphate plant is generating a lot of controversy over whether the state’s environmental protection agency should have notified area residents sooner than the three weeks it took before the public found out about it. That’s unacceptable to North Florida Congresswoman Gwen Graham.

“So we filed a public records request last week to find out when they notified people and what actions they had been taking since they found out about the sinkhole from Mosaic.”

Governor Rick Scott is now asking for residents to be notified of potential contamination within 24 hours and will ask the legislature to make notifications permanent in state law.

And Graham says she’s pleased to see the move. But the Mosaic sinkhole isn’t the only issue that’s gotten attention lately. Out in Tampa, Hurricane Hermine caused water to pile up, leading to sewage failures and the dumping of more than 100 million gallons of untreated water into the Bay. St. Petersburg Mayor Rick Kriseman has been on the hot seat over his administration’s handling of the spill.

University of West Florida political scientist Susan McManus says “when you’re the chief executive, the head of the city or the Governor, you’re the one who is going to be taking all the heat. You’re the executive and the buck stops on your desk in the minds of the voters.”

And as Tampa grapples with its own water woes, North in the Panhandle, a big fight over a wastewater pipeline has broken out: with counties taking sides. Taylor County’s Fenholloway River was at one time, the only water body in the state designated for industrial use. Now the Foley Cellulose paper plant wants to build a wastewater pipeline to carry treated wastewater closer to the river’s end, near the Gulf of Mexico. But that’s not acceptable to clean water advocate Linda Young.

“It obviously doesn’t meet water quality standards or come close to it. And they’ve been allowed to exist like this for more than 70 years," she said.

But plant spokesman Scott Mixon says the plant has spent more than 100 million dollars to clean up the river. And he says opponents to the wastewater plant are misrepresenting. The proposed wastewater pipeline is part of ongoing efforts to clean up the Fenholloway and are also part of the plant’s wastewater treatment upgrades.

“Several have mentioned that we’re going to take effluent and we're going to put dioxin into the gulf. We stopped using elemental chlorine in the 1990’s and we’ve been non-detect for dioxin since then. We use the EPA- approved method for testing for dioxin," said Mixon.

Wakulla County has passed a resolution in opposition to the plan, Taylor County is in favor. And then there’s Central Florida’s Lake Okeechobee, where polluted water discharges from the Lake continue to plague estuaries and rivers around it. USF Political Scientist Susan McManus says Floridians take their environment seriously, and politicians hear about it frequently when anything goes wrong.

Gov. Rick Scott has ordered the Florida Department of Environmental Protection to investigate a sewage spill in St. Petersburg.

Members of Pinellas County's legislative delegation say the early closure of a sewage plant is a main reason why the city of St. Petersburg had to release millions of gallons of partially treated sewage into Tampa Bay during Hurricane Hermine.

At a delegation workshop Tuesday city officials explained that the Albert Whitted plant near downtown could still be running today, but closed in April 2015. At the time, city officials told the state another sewage plant in the southwest part of the city could handle the additional load.

St. Petersburg has a plan to minimize sewage spills during major rain events and the Department of Environmental Protection wants to ensure it follows through.

A fertilizer company spokeswoman says one well on its property has seen contamination spread from a huge sinkhole that sent contaminated water and fertilizer into Florida's main drinking water aquifer.

Residents near a Florida fertilizer plant that has leaked more than 200 million gallons of contaminated water into a drinking water aquifer can have their wells tested for free.