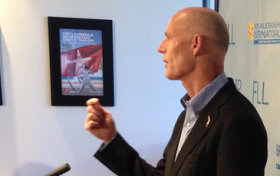 Gov. Rick Scott opened fire on the U. S. Centers for Disease Control and Prevention in Fort Lauderdale on Friday, accusing the agency of starving Florida of the information, equipment and even the testing kits the state needs to be safe from the deadly Ebola virus.

"The CDC has not fulfilled any of Florida's requests," Scott said angrily. "We are now asking publicly to support us in these important efforts for our state."

Between the lines of the governors' specific complaints, there seemed to be deep misgivings about the CDC's competence as it confronts a major public health crisis.

"They need to have a conference call with all of our health care professionals and say what was different in Dallas from Atlanta. Because we're taking action based on CDC guidance, and maybe that's wrong," Scott said.

Scott said the CDC has already admitted that it failed to "get ahead" of the Ebola cases in Texas and he wondered what was the procedural explanation for the fact that Ebola infections had taken place at Dallas Health Presbyterian Hospital but not at Emory University Hospital in Atlanta, which has just admitted its fourth Ebola patient, Texas nurse Amber Joy Vinson.

The CDC said this week that protective gear worn by health professionals in Dallas may have been inadequate.

Vinson was infected as she helped care for Thomas Eric Duncan, the Liberian man who died of Ebola at Presbyterian. And she was also part of this week's Ebola scare at Fort Lauderdale-Hollywood International Airport, close to the site of Scott's news conference.

After the onset of Ebola symptoms, Vinson flew on a Frontier Airlines jet that landed in Fort Lauderdale on another flight a day later. Broward Aviation director Kent George says he was unaware of the brush with Ebola until two days after that.

Scott said CDC should trace and contact any passenger who flew on the Frontier aircraft in the 24 hours following Vinson's flight. It was the first of what he called "demands" he made of the public health agency and the federal government.

The governor said the state has not been idle as it awaits federal action. The Florida Dept. of Health has provided $1.2 million or hospital protective gear and 46 hospitals have reported they have -- at the state's request -- scheduled and performed mandatory training for doctors and nurses.

Scott is also joining the growing chorus of elected officials who want to see restrictions on travel to the U. S. from the three west African nations where Ebola is common, Liberia, Guinea and Sierra Leone.

"I think common sense would be yeah, you restrict travel," Scott said. "It makes all the sense in the world."

Step inside All Children's Hospital and you're greeted with three things: hand sanitizer, tissues and masks decorated with little cartoon Band-Aids with legs, feet and smiles. "Dirt Squirt Alert!" a sign says. "Stop the spread of germs that make you and others sick!"

Nurses from National Nurses United gathered in Tampa's Ybor City on Wednesday to stage a "die-in."

It was a dramatic way to get the public's attention with the hope that hospitals would get the message that the time to prepare to fight Ebola is now.

Pasco County ICU nurse Louise Easty said she thinks some hospitals are making efforts to get up to speed, to where they need to be.

The nation's Ebola crisis has yet to reach Florida, but state officials want to spend millions to prepare for a possible outbreak.

This week, top health official asked for permission to redirect money from federal grants to buy full body suits for health care workers who may have contact with any potential victims of the virus.