According to a new study, workers and their families are spending a bigger share of their income on health care than in previous years – especially in Florida.

On average, Floridians along with 10 other states, last year spent more than eight percent of their incomes on their monthly health insurance premiums. 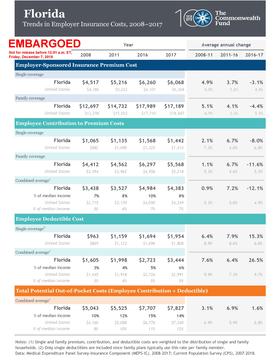 The cost of employer-sponsored insurance premiums actually decreased overall from $6,260 a year to $6,068 for single coverage, and from $17,989 to $17,189 for family coverage between 2016 and 2017, according to a new report by consumer advocacy group The Commonweath Fund.

But Sarah Collins, the lead author on the study and Commonwealth Fund Vice President for Health Care Coverage and Access, said that’s still too much.

"People in employer plans in Florida, both single plans and family plans, pay more for their premiums than the national average,’ Collins said.

“Florida is one of the 18 states that we identified in the survey where people potentially have very high out-of-pocket costs relative to their income. And part of the other factor in the Florida story is that median income is well below the national average."

National highlights from the report:

When it comes to keeping people out of the hospital, Florida didn't score so well on new scorecard that pits state health care systems against one another.

"The Commonwealth Fund" report gave Florida a rank of 45 out of 50 states, plus Washington D.C., when it came to the "Avoiding hospital use and cost" indicator. That's a drop of 13 points between 2012 and 2015.

Florida saw an “impressive” drop in the rate of uninsured adults in 2014 and 2015, the first two years of full implementation of the Affordable Care Act, according to a study released Wednesday.