Vandals tampered with oyster aquaculture equipment in Wakulla County this weekend, which investigators say is a felony offense. WFSU spoke with one of the farmers, who says the incident is derailing this year’s crop. 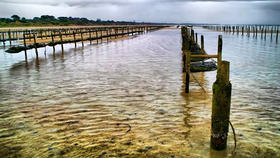 Reid Tilley calls himself a first-generation oyster farmer. Even at 21 years old, he wants to be in this business for the long haul. State regulators were ready to approve his brand new oyster farm this week, but someone vandalized it, and others. He has a shipment of one million baby oysters coming in soon, and a friend has agreed to take them while he sorts things out. But not all of the affected farmers have that luxury.

“It’s not gonna cost me near as much as it would cost somebody else. A lot of people don’t have the ability to go hop on somebody else’s lease and put their oysters out on it," Tilley said. "I’m in the situation where I’m pretty well taken care of just because of the fact that I’ve created relationships out there.”

Wakulla County Sheriff's Office investigators say someone tampered with the navigational markers outlining sixteen oyster aquaculture leases. The poles serve as coastal survey posts and can alert boaters to the floating baskets and lines that may be in the area. Tilley says he can't move forward with this year's crop without the poles in place.

"My lease was going to be finalized this week and I was going to start putting up the infrastructure, all the lines and poles and all that. But now that’s all been kind of ruined by this vandalism thing," Tilley said.

The practice of farming shellfish, rather than harvesting them wild, is relatively new to the area. Many long-time fishermen prefer to tong for oysters growing on the ocean floor, and some local elected officials are resistant to the new practice as well. Earlier this year the Wakulla Commercial Fishermen's Association urged the state to stop approving new aquaculture leases in the area.

But Tilley says he, and the aquaculture industry, isn't going anywhere.

Local and state officials are investigating the incident. Anyone with information can contact the Wakulla County Sheriff’s Office.

The U.S. Supreme Court will hear Florida's lawsuit seeking to limit the amount of water its neighbor Georgia can take from a shared river system.

The court's decision Monday to hear the case was applauded by Florida officials, and marked a new chapter in the decades-long regional battle over rights to take water from the Apalachicola, Chattahoochee and Flint river system.

After 26 reported cases and nine deaths in Florida this year from exposure to vibrio vulnificus, health officials advise against eating raw shellfish and exposing open wounds to seawater.