Nurse Practitioners Get Small Victory Toward Expanded Powers In Florida 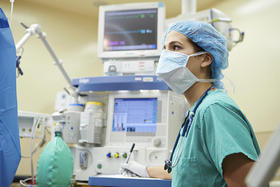 Several bills working their way through the Florida Legislature would give nurse practitioners the ability to prescribe stronger medications and clarify other duties.

A second Senate committee has approved a bill that spells out the ability of highly trained nurses, known as practitioners, to order controlled substances in the hospital.

Senator Denise Grimsley, R-Sebring, is a registered nurse who sponsors the bill. She gave the Senate Finance and Tax committee a brief explanation about prescribing versus ordering.

“Prescribe is when a prescription is written and taken to the pharmacy. Order is when it’s ordered in the hospital,” Grimsley explained.

State statutes weren’t clear about the ability of nurse practitioners and physician’s assistants, known as PA’s, to order drugs like narcotics in the hospital. So two years ago, lawmakers drafted legislation clarifying that PA’s can order drugs. At the time, they didn’t change the wording regarding nurse practitioners. This new bill is meant to take care of that.

A separate bill would give nurse practitioners and PA’s the ability to prescribe controlled substances, which is allowed in most states.  But the Florida Medical Association and other doctor groups say a higher level of training should be required, and they oppose the bill. The proposal is ready for a full vote by the Florida House.

The Nurse Will See You Now: Expanded Authority Proposal Gets Moving In Legislature

A plan to expand the powers of advanced registered nurses hasn’t yet caught on in the legislature, but eased out of a House Health panel Wednesday. The fate of bill remains cloudy, but its sponsor says even if it fails this year—the issue isn’t going away.

The two biggest health initiatives of the Florida House for 2014-15 both died at the hands of the Senate during the final 36 hours of this year's legislative session, which ended around 10:30 Friday night.

--Allowing nurse practitioners who have sufficient training to practice independently of physician supervision;

--Setting up a structure under the law for the growth of distance health care through  telemedicine or telehealth, terms used at various times during the session.

There’s a flurry of health policy activity as Florida’s 2014 Legislature comes to an end tonight.

On Thursday, the Senate didn’t budge on its ongoing opposition to giving nurse practitioners more authority.