Sexual assault survivors practicing Brazilian Jiu-Jitsu in West Palm Beach Saturday flipped into “the guard,” which mimics a situation where one person lays on their back and an attacker is in between their legs.

Mimicking a potential assault situation, Jiu-Jitsu instructor Steven Vasquez attempted to choke them from above. The group had only been attempting to master a move for 15 minutes in the Oskarate USA Martial Arts Studio.

“Now, what’s the first thing you’re going to do to get out of this?,” Vasquez asked.

In the next few seconds, young entrepreneur Yessenia Urena locked her legs around his neck, pushed his arm under her calves and, a couple moves later, contorted her body so he was powerless beneath her.

She raised his arm while squishing his head into the mat - Vasquez tapped out.

Urena recently founded the nonprofit End Rape Culture, which aims to address the root causes of sexual violence in South Florida, where she says hypermasculinity and human trafficking rates are higher than other areas of the country. 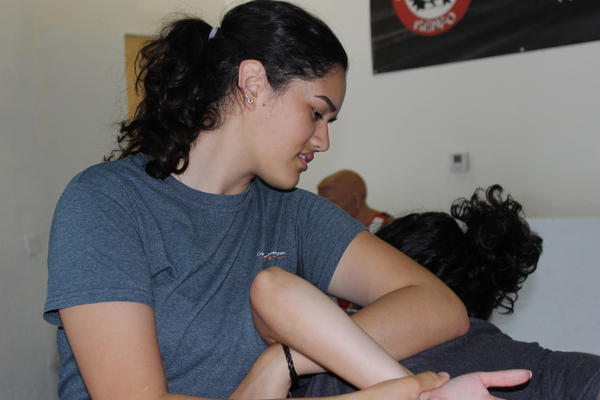 Now her and Vasquez, her partner and boyfriend, are teaching their South Florida community how to fight back with a six-week long free self-defense class every Saturday until July 28.

Urena named this class "The Guard" because it refers to a position where a seemingly weaker person is on their back and stresses finesse over force. This is an advantageous position for someone who is trained in Jiu-Jitsu and faces a dangerous situation.

“We teach how to choke a potential assailant, to break their arm if necessary, and otherwise submit them, to make them fall asleep,” Urena said. 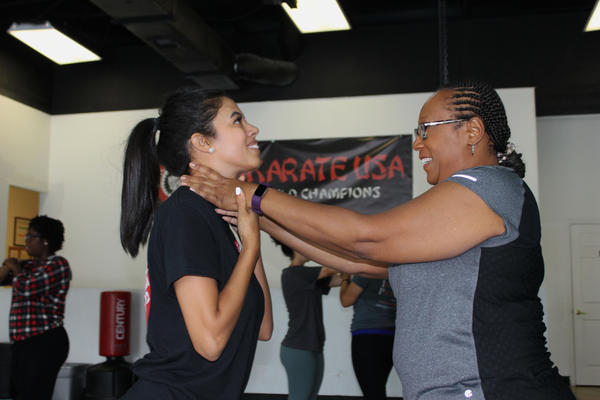 She said the mission at End Rape Culture is to dismantle societal constructs that normalize sexual violence, particularly hypermasculinity, the sexual objectification of women’s bodies and the systematic support that upholds rape culture.

“Everyone has experienced rape culture, at some point,” she added.

“I myself was molested when I was 14 years old, by an older cousin. I was shamed for it, I was silenced,” she said. “There’s a stigma of being a survivor.”

Beyond that instance, Urena went through a toxic, non-consensual relationship that drove her to establish her nonprofit. “I just thought that if I could prevent this from happening to anyone else, then it would all be worth it,” she said. 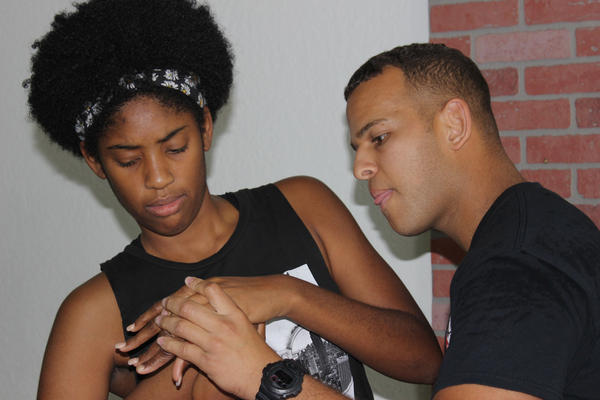 Vasquez, who has trained in Jiu-Jitsu for 10 years, said he started coaching Urena casually at home. One day she asked him to teach for End Rape Culture, so he started practicing with other beginners. Eventually, his teaching spiraled into 'The Guard' course.

“In the guard position, which is played a lot in Jiu Jitsu, if you’re between my legs, I can control you. I can go for submissions,” he said.

“Most people think, wrestlers as well, oh you’re on your back, you’re losing. But if you have a good guard game, you can put the other person in panic mode.”

Vasquez said the classes are set for six weeks, but the program has potential to grow as the word gets out.

“What I would love in a dream situation is to reach out to girls in college, in high school, and just continue teaching. Not just girls, but guys who are also sexually assaulted,” he said.

The couple said End Rape Culture currently has no donors, and all the classes and workshops so far have been done out-of-pocket or with in-kind donations. For more information on classes, workshops and getting involved, visit ercnow.org.

Three South Florida high school students have come up with an invention that could protect people from becoming rape victims. What's that invention? They call it the Smart Straw.

Florida's crime rate is dropping, but the number of rapes is growing.