This summer, an outgoing City of Fort Myers employee revealed that the city used land near downtown as a dumpsite for decades during the 20th century.  In time, Dunbar--a predominately black neighborhood--grew around that dumping area. Since June, the city has tried to address the problem with tests and community input. This week, additional groundwater tests were done and the city retained legal council to contend with potential lawsuits.

In a November report, groundwater tests from around Dunbar’s toxic sludge dumping site showed the presence of arsenic. One reading found up to 53 micrograms of arsenic in the groundwater there— more than 5 times higher than the Environmental Protection Agency’s safe standard of 10 micrograms.

The city hired a company to test the groundwater monitoring wells again this week. Two members of Florida’s Department of Environmental Protection were also at the site, standing by.

Tests should reveal what exactly was in that byproduct. @wgcu pic.twitter.com/w1R1hIXELQ— Quincy J. Walters (@quincy_walters) December 4, 2017

Jeanne Scott lives across the street from where the city dumped lime sludge—a byproduct of the water treatment process from the 1960's until the 1990's. She said she just found out the area was potentially toxic in June, when the city put a fence up.

"All my kids kinda raised up playing in there," said Scott. "And recently, the grandkids was over there, just before they put the gate around it.” 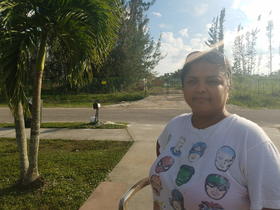 Scott said she also recently found out the property she lives on was once home to a dumpsite.

“I’m getting someone to come out and test my water,” she said.

Earlier this year, the City of Fort Myers offered to test wells of residents who live near the dumpsite. But Scott said she didn’t trust them.

At a City Council meeting this week, residents of Dunbar shared their stories of illnesses from Multiple Sclerosis to cancer. They urged the city to react quicker.

"The sin of omission is just as great as the sin of coalition"--Willie Green, a Dunbar resident, says he understands current city officials weren't responsible for initial dumping, but more needs to be done @wgcu #dunbar pic.twitter.com/uMYmFYwKYe— Quincy J. Walters (@quincy_walters) December 4, 2017

“My wife was brought up on Jeffcott Street," said Rickie Rogers. Jeffcot is on the other side of the dump site. "She’s 55 years old. She can’t walk anymore. She’s got M.S. Played in that same stuff we played in. I’ve been going back to the doctor for years now and they can’t find out what’s wrong with my stomach.”

“Multiple Myeloma. That’s the cancer I was diagnosed with," said LaShonda Evans-Williams. "So, my plea to you guys tonight is: Don’t overlook us. It’s something out there that’s making us sick.”

Evans-Williams said she was diagnosed with the blood cancer in 2013 and was given 3 to 7 years to live. She’s in the fourth year of that diagnosis.

“I’m not able to work," she said to reporters on the steps of city hall.  "I’ve had a bone marrow transplant. I go through chemo, radiation. I take stuff for my bones.”

Evans-Williams said she was hesitant to speak at this week’s city council meeting. But she feels that the Dunbar community has been ignored for decades and she doesn’t know how much longer she has to live.

“If that time shall come, I want my voice to be heard before I leave this earth," Evans-Williams said. "I want people to know to get out, get tested, get screening, get anything you need on your health. Because if you don’t look out for yourself, no one else is gonna look out for you."

At that same city council meeting, in a 5 to 1 vote, the council voted to spend up to $150,000 to get legal counsel to defend against potential lawsuits from residents.

Anthony Thomas, who used to live in Dunbar, said there’s a better way to spend that money.

“The city feels it is more appropriate to spend this money to defend themselves against their citizens who have been affected by this than to spend any money on those citizens to setup free cancer screenings and screenings for exposure to arsenic," said Thomas. "This is outrageous.”

Councilman Johnny Streets who represents Dunbar voted to get the city legal counsel, but there was a condition to his vote.

“With the fact that this is not against our constituents or our citizens,” said Streets.

Councilwoman Terolyn Watson was the only opposing vote in getting legal counsel. She said the optics are going to look bad to Dunbar residents.

“Regardless of how we sit up here and say it, it still makes them feel like we’re fighting against them," said Watson. "We can say we’re not all day long, but they’re gonna believe something else different because we’re hiring an attorney.”

Instead, Watson asked why can’t the money for lawyers be used to give medical screenings to people in Dunbar.

The City Manager Saeed Kazemi told her that they need to wait for all of the test results to come in to know what they’re dealing with.

The results from this week’s testing should be available in January. And the city has already retained legal counsel.

Conservation groups plan to sue Florida Power & Light after the discovery of a radioactive isotope in Biscayne Bay linked to a nuclear power plant in southeast Miami-Dade County.