Monarch Butterfly Population Down 80 Percent Since 2005 But Researchers Hopeful

The recently published results of a 37-year study of monarch butterflies in north-central Florida shows the number of adult butterflies migrating to the Sunshine State and the number of eggs they’ve produced have declined by about 80 percent since 2005, but researchers say there’s a lot being done to help save the iconic orange and black insect.

University of Florida professor Jaret Daniels, one of the co-authors of the study, “A long-term survey of spring monarch butterflies in north-central Florida,” said the results line up very closely to a Monarch Watch study that showed a very similar decline in the overwintering colonies in Mexico over a fairly similar time period. Overwintering is when monarchs wait out the winter season.

Daniels is the director of the McGuire Center for Lepidoptera and Biodiversity at the Florida Museum of Natural History. To put it simply, he’s an insect conservationist who studies butterflies.

He said the monarch’s return to Florida from their overwintering grounds in Mexico is timed synchronously with the lifecycle of milkweed and when that plant’s flowers start to bloom.

Milkweed is the literal lifeblood for monarch caterpillars. Female monarchs only lay their eggs on milkweeds and a few other plants in the same family. Monarch caterpillars feed exclusively on those leafy green plants. 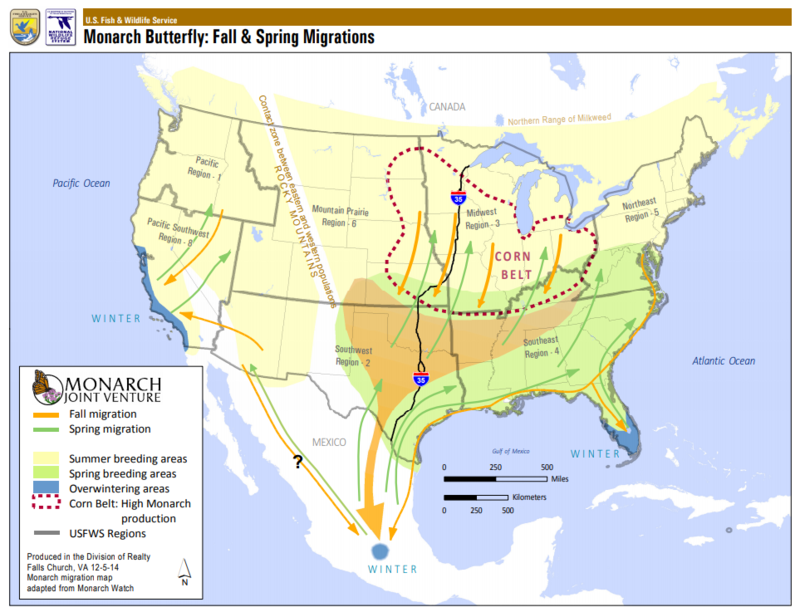 “Monarchs, when they’re coming out of Mexico and moving north and recolonizing much of the eastern U.S., they’re simply following the availability of milkweed north,” Daniels said. “So they move out of Mexico and colonize the southern tier of the eastern portion of the U.S., breed there, their offspring will move a little bit further north. And so they’re following spring as it progresses northward.”

But in recent years milkweed has become harder to come by in the wild, resulting in a loss of breeding habitats for monarchs.

Daniels said that decline in milkweed can be linked to factors like habitat loss and development, but the timeline for the decline in monarch butterfly populations lines up almost perfectly with the expanded use of glyphosate herbicide, commonly known as Roundup.

“I grew up in the Midwest, I’m from Wisconsin originally,” said Daniels. “When I was a kid you could go out to farmland - cornfields and soybean fields - and you’d often find milkweed growing right alongside the crop.”

“With the onset of Roundup Ready crops it allows the growers to spray for weeds within their crop but not kill their crop,” he said. “So the crop survives the application of Roundup but any weeds, native plants or wildflowers within the crop are killed by the herbicide. So it’s taken away a lot of the availability of milkweed in the agricultural midwest and great plains, along with continued development and habitat conversion, things like that.”

Data from the pesticide national synthesis project shows that between 1997 and 2014 the amount of Roundup applied in the U.S. to herbicide resistant corn and soybean crops increased from an estimated 500,000 to 100 million kilograms.

According to one estimate, since 1999 widespread usage of Roundup has caused the loss of 40 percent of common milkweeds that had previously grown in agricultural fields in the Midwest. That’s more than 850 million individual plants.

Another major factor that Daniels and other researchers said could be playing a role in declining monarch populations is climate change.

Despite their tropical origins, monarchs need moderate temperatures to survive the winter in Mexico, to recolonize the U.S. and Canada each spring and to produce large populations for the return migration at the end of the summer. Rising temperatures will likely have a negative impact on the butterflies as well as the milkweeds and nectar plants they depend on.

Daniels says there’s already a lot being done by policy makers to address the problem.

“There’s been a lot of emphasis on pollinator conservation, and a lot of it tied to the Monarch. So agencies from federal agencies down to state agencies and local governments are involved, whether it be trying to provide incentives for landowners to incorporate pollinator friendly habitats to the use of roadways for habitats,” he said. “So I think the agencies are really committed to this and many of them are doing a really wonderful job.”

And he says anyone can help on an individual basis simply by planting milkweed in their own backyard. But Cammie Donaldson with the Florida Association of Native Nurseries warns that the type of milkweed you plant is very important.

“We encourage people to ask, wherever they’re shopping for plants, whether it’s at their local garden center or at a box store or online, please ask for pesticide free, native ecotype milkweed,” she said.

That’s because non-native species of the plant can cause problems of their own.

The most commonly planted non-native species is tropical milkweed, which doesn’t die back in southern states. Researchers said that could be contributing to an increase in the infection rate of parasites like OE disease and it could disrupt the monarch’s migration patterns. Specialists said anyone planting tropical milkweed should be sure to cut it back in October so as not to interfere with the monarch’s migration. 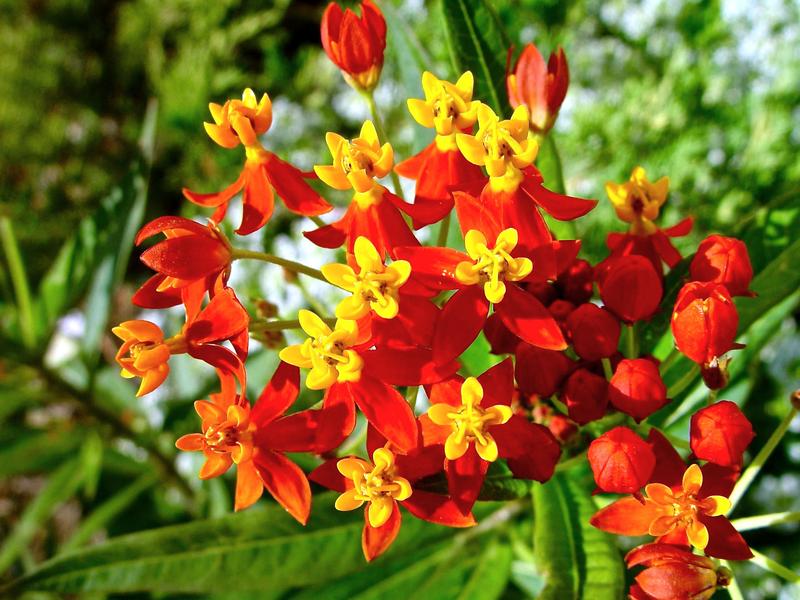 Donaldson said PlantRealFlorida.org has a list of online providers who will ship pesticide free native plants and the native nurseries that carry them. One of those nurseries is Native and Uncommon Plants based in Jacksonville.

Owners Leslie and Alfred Romeu said they always try to keep native species of milkweed in stock. They recommend swamp milkweed, sometimes referred to as pink milkweed, which they sell in 4 inch and 1 gallon pots. 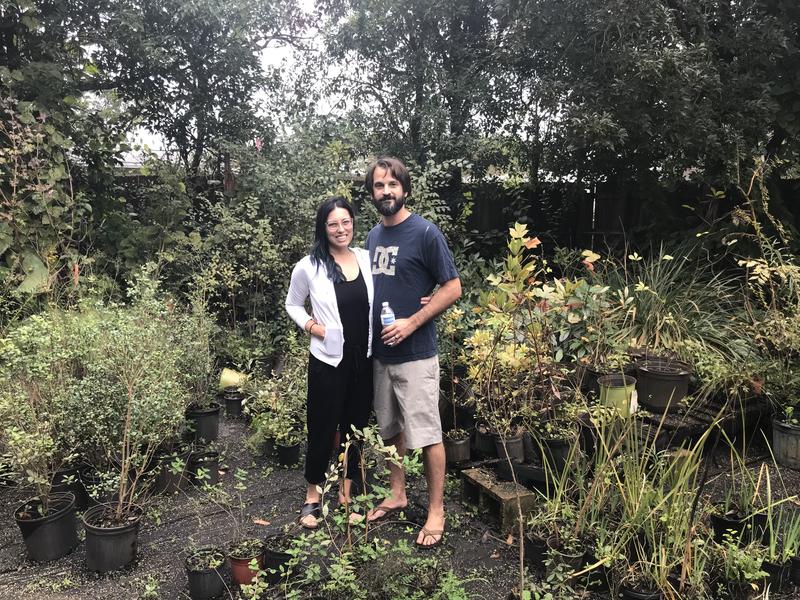 “They like a lot of sun. They prefer moist soil, but they can dry out a little bit in between. They’re going to get about 3 to 5 feet tall and look a little unkempt, so make sure you put them somewhere that’s not going to be a focal point of your yard,” Alfred Romeu said. “If it’s a butterfly garden you want it more towards the back so the vertical appeal will be there. Once they’re established they don’t need any kind of irrigation as long as they get that little bit of rain that we normally get.”

Butterfly photographer Bill Berthet recommends gardeners scatter host plants like milkweed around their yard rather than clump them all together in one spot.

“We have predators that we’re dealing with all the time and even though there is a toxin in the milkweed plant to help predators stay away from the Monarch and its caterpillars, it’s best to put the plant in five or six different spots,” he said. “That way it keeps predation lower than if you had it all in one spot, because if it’s all in one spot the predators know about it, then they’ll congregate in that one spot.” 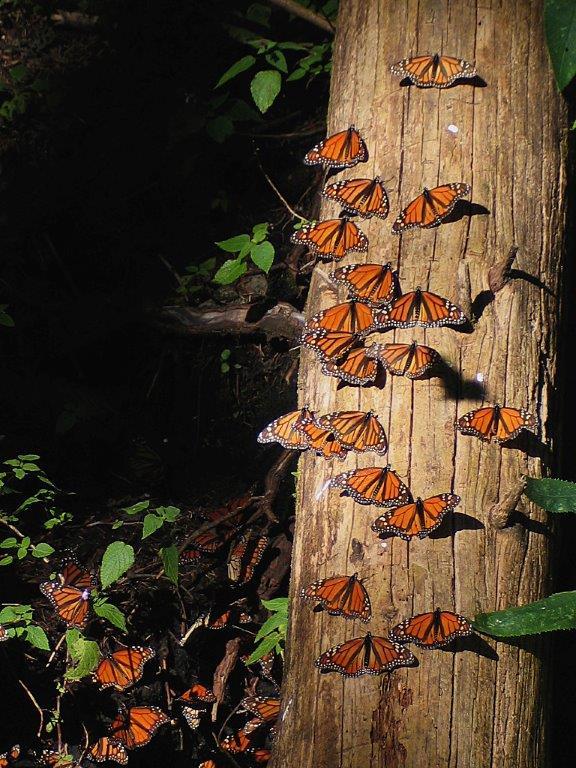 Donaldson said she recently grew swamp milkweed in her own backyard. “I kept it in a pot and I’m kind of a lazy gardener and I didn’t do that a great job of watering it, but it did just fine and it shot up five feet and had these great pink flowers.”

“It was incredible all the other insects that came to it,” she went on to say. “Yes Monarchs came, but so did all sorts of other butterflies and other bees and it was just amazing. It really lends a lot of credence to a saying in the native plant world: ‘if you plant it they will come.’ Every time you plant one of these fantastic native plants that are great pollinator plants, you discover stuff you never knew existed.”

Daniels said the plight of the monarch should serve as a stark warning.

“If it can happen with the Monarch it can happen with many other species that we all hold dear, that might be much less abundant than the monarch,” he said. “So it’s a good reminder that we have to be careful, otherwise we are going to lose species, and we don’t want that to happen.”

But he remains optimistic.

“I’m hopeful because the monarch is such an iconic organism. It’s a great sort of rallying cry,” he said. “It’s one of the few, if only, butterflies that most people know and it has that truly iconic annual migration. So I think if it can happen it’ll certainly happen for the Monarch. It’s easy to rally the troops around such a charismatic organism.”

According to Daniels, efforts to help the monarch will benefit other species as well. “I think it’s a great way of engaging the public, engaging agencies and I think it has a real chance of being successful.”

New research shows the number of butterflies and caterpillars in North Florida has been declining substantially over the last decade or so.