MOCA To Host Discussions On The First Coast’s Changing Environment

The Museum of Contemporary Art (MOCA) is set to host two panel discussions highlighting the ways a changing environment may impact Jacksonville and Northeast Florida.

The first event, “Climate and People: How Will Our Communities Survive?” will run from 6 to 7 p.m. on Thursday night, Nov. 29. The second event, “Water + People: State of Our Waters,” will be held on Wednesday, Dec. 5. Both will be moderated by columnist Ron Littlepage who retired from the Florida Times-Union earlier this year after 39 years with the paper.

The panel discussions are made possible by support from the River Branch Foundation, a regional foundation that supports and gives money to organizations and projects that focus on environmentalism. They provided the funding for MOCA’s exhibit on display now, “Gideon Mendel: Drowning World.”

“They also wanted to see us develop some programming around that exhibition, and this panel discussion came out of that,” said Matthew Patterson, Assistant Director of Community and Public Programs at MOCA.

Gideon Mendel is a photographer from Johannesburg, South Africa, who began his career photographing apartheid. He moved to London in the 1990s where he focused on capturing the impact of HIV/AIDS. He’s been working on “Drowning World” since 2007. 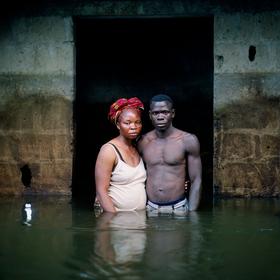 “He literally travels the world, goes to different places that are affected by flooding and photographs people in their homes during the recovery effort,” Patterson said.

The exhibit also includes Mendel’s “Watermark Series,” a collage of water damaged family photos that he collected during his travels.

Four University of North Florida professors from various departments will be participating in Thursday’s panel discussion:

“They’re going to talk about, first their reactions to the exhibit, to “Drowning Worlds,” because that’s sort of the impetus behind this panel discussion,” said Patterson. “And then from there they’re going to be talking about what is the baseline of climate change. What are the facts? What is the science behind it? And then how it affects local populations and then also how it has affected different populations throughout the world, historically.”

“What this exhibition at MOCA really hammers home is that these are shared experiences across all cultures,” Prof. Rosenblatt told WJCT News. “The artist took pictures in Asia and Africa and here in our backyard, in Clay County. So everyone across the world is sharing similar experiences and we all need to be thinking about how to adapt to the new reality.” 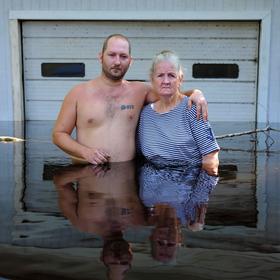 “We tend to think of ourselves in the U.S. as being in the richest country and that we are sort of immune to some of the problems that affect other parts of the globe,” he went on to say. “And what the exhibit really shows is that that’s not the case and we all need to be worried about this.”

Rosenblatt said his contribution to the panel discussion will focus on the biological responses to climate change when it comes to plants and animals. “Specifically what I study is alligators, how alligators respond to things like sea level rise, rising temperatures, things like that,” he said. “But I’ll also be talking about the way people tend to think about climate change and how they think about it as sort of a foreign problem that we don’t need to worry about as much here in the United States.”

According to Patterson, the December 5 event will be similar to Thursday’s, but it will feature the St. Johns Riverkeeper and the Calusa Waterkeeper.

“There’s going to be some overlap between the two presentations, just because they’re dealing with similar issues,” he said. “But with the one in December, these are really organizations who are out there, they’re on the water, they’re monitoring these waterways, reporting back what they’re finding and then going out and being advocates for what we can do, as far as change.”

“This is something that has a direct effect on Jacksonville and our populations. Gideon not only photographs populations around the world, but he came to Jacksonville right after Hurricane Irma and photographed people in San Marco and in Middleburg,” said Patterson. “Both of the presentations are going to link back to that and be like, ‘this is a real issue. This is happening here in Jacksonville. How do we deal with this?’”

Rosenblatt admitted that climate change can be a pretty depressing topic, but he says there’s hope out there. He gets hope from the business community.

He said individuals can have a positive impact in their daily lives simply by trying to consume less, whether it be food, clothing or fuel. “The most important things are driving less, taking more public transportation, trying to reduce your plastic usage and trying to reduce your consumption of meat overall.”

But, he stressed that doesn’t mean people need to give up everything they love. “If currently you eat five or six steaks a month, think about if you can reduce that to three steaks a month. If you can just bring that down a little bit, that helps,” he said. “It’s not about giving things up, it’s just about reducing your overall consumption of certain things.”

Both panel discussions are free and open to the public.

The latest in a series of scientific reports on climate change was recently submitted to Congress. A group of Florida scientists delved into the report, and things aren't looking too good if you've got beachfront property.