A group of teenagers formed a circle in the middle of a former school library turned community meeting space in Liberty City on a recent Saturday afternoon.

Aliyah Blackmon, a junior at Miami Norland,  is standing in the middle reading from a sheet of paper.

“Step up if you haven’t been sleeping due to the recent gun violence in our neighborhood,” she said.

A few teens step up.

Nearly all of the teens stepped forward.

The students in the room attend high schools that span from downtown Miami to Miami Gardens, but they’re  united in the reality that when they go home they live in neighborhoods where shootings are far too common.

“We shouldn’t have to go through it,” said Shatony  Rivers, a senior at William H. Turner Technical Arts High.  “It’s not normal and we don’t have any relief coming to us.”

The nation is currently paying close attention to the wave of youth-led activism in the Never Again Movement that started at Marjory Stoneman Douglas High after the mass shooting in February. And while the activism in this room wasn’t borne out of Parkland about 45 minutes north, the teens say they’re taking this moment, when lawmakers and adults seem to want to hear from youth, to make sure their concerns are heard and addressed.

Shatony and some of her peers in the meeting attended the March for Our Lives rally in Washington D.C.

Shortly after,  a spate of shootings claimed the lives of a 4-year old, a 17-year old and an 18-year old in the Liberty Square housing project-- just a few blocks from Shatony's home.

“Seeing that happen,” she said.  “I felt defeated.”

Shatony helped convene this meeting of teens who’ve experience gun violence to focus on their next steps.

Valencia Gunder, a community activist, was one of the few adults in the room. She gave the teens an overview on organizing and advocating for a cause.

Protesting is a good first step, she said. Students from Miami Northwestern High recently walked out in a mass demonstration because one of the teens shot and killed in the housing project was a 10th grader at the school.

Gunder said that protest got people’s attention--the media, politicians and the overall community.

“You go out there, you agitate. They’re like,  ‘Oh these students are hyped. They're upset. They want this thing to stop,' ” said Gunder.

But the second step is what they’re doing at this meeting.

They are trying to answer questions like, What is the long-term goal? How do you sustain an anti-gun violence movement led by black youth in low-income neighborhoods? And how do you get into the room with the adults who make policy decisions in these communities? 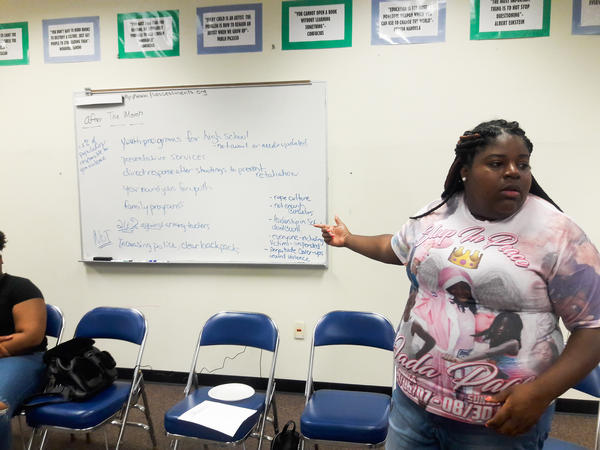 Gunder's advocacy around gun violence picked up when her 8-year old goddaughter Jada Page was gunned down in North Miami-Dade nearly two years ago.  Since then, she’s made her way into some of those rooms with lawmakers.

“What the person's going to ask you is, ‘So what is it exactly that you want?' ” Gunder told the teens. “See, what y'all don't want people to think is just because y'all are youth, and y’all from underserved communities that y’all cannot articulate what it is y’all want and need to be safe.”

Andralique Byrdsong attended the meeting with her littler sister. She graduated from Miami Norhtwestern last year and said one immediate need is programming at schools that teaches about neighborhood gun violence and conflict resolution straight on.

“I feel like this is something we need to start from elementary school up,” she said.

Marcus Williams, a student at Miami Edison Senior High, added that cameras should be installed in the public housing complexes where many of the shootings occur.

Gunder told him, “What if I told you that already exists?”

Some of the teens laughed and were visibly surprised. “Nah.”

Gunder explained that in the case of the most recent shooting in Liberty Square, the cameras were not working.

“Don’t be discouraged,” she told Marcus. “Now we've got somebody who we can hold accountable. So who's responsible for making sure these cameras work? Those are the questions you should ask.” 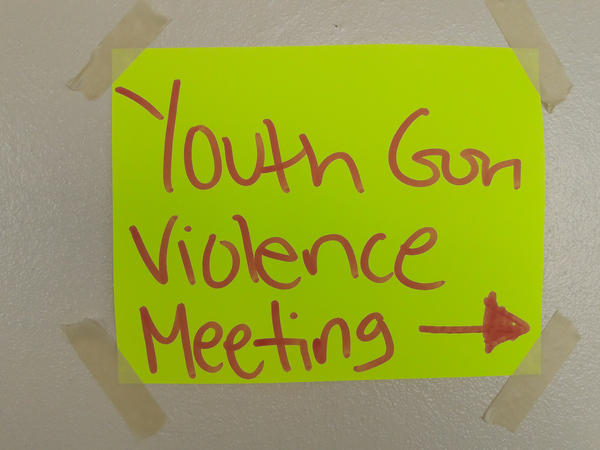 Several of the teens said they want to make sure the conversations and policies around gun reform and gun violence are specific to their  experiences.

Raqqya  Adside-West suggested a tour of student ambassadors who go to local high schools, sharing their personal stories of living with gun violence and solutions.

“Like how the Parkland kids went on a tour across the nation, going to different schools,”  said the Miami Central junior.

Raqqya also went to the March For Our Lives rally in D.C.

“That was my first time hearing the whole narrative about gun violence and how it wasn't natural. I didn't know it wasn't normal,” she said.

She remembers the first time she personally knew someone who got shot. It was in elementary school. A fellow fourth grader was struck by a bullet in a drive-by shooting.

Leaving Miami to hear people from outside her community who don’t deal with shootings regularly talk about the issue sparked something in her.

“We had this whole march and there was all the white, and white-passing people talking about how they didn't want it in their communities like we've had it in our communities for so long,” she said. “We want it to stop too.”

The students acknowledge adults have to join them in their quest to stop shootings in their neighborhoods, but Jazandrea Byrdsong, a sophomore at New World School of the Arts,  said the grown-ups can’t take over and try to silence them.

She doesn’t want their community gatherings to turn into another meeting where “all the people you know 40 and up is like, you know, ‘La, la,la, la, la’ and I can’t talk,” she said. “What we need to do is show them we are making this very, very open for youth.”

Christopher Powell was pretty sheltered growing up in Coral Springs.

“I didn’t wake up worrying, like many others across the country, about losing my life in school to gun violence,” the 17-year-old high school junior said during a town hall meeting on gun control and school safety on Thursday night.

Then he survived the massacre at Marjory Stoneman Douglas.

“After the shooting on Feb. 14, I now have a different sense of security,” Powell said.

Hundreds Of Thousands March For Gun Control Across The U.S.

Hundreds of thousands of students, teachers, parents and victims rallied in Washington, D.C., and across the country on Saturday to demand tougher gun control measures, part of a wave of political activism among students and others impacted by school shootings.