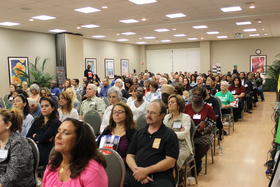 Miami-­Dade County has the largest percentage of individuals with serious mental illnesses among all urban areas in the U.S., according to data from the Eleventh Judicial Circuit Court.

The figures led the psychiatry department at the University of Miami’s Miller School of Medicine and the Miami branch of the National Alliance on Mental Illness to host the Stop the Stigma conference. The event, held Saturday at UM's hospital, aimed to "stop the sitgma" of mental illnesses.

Pete Earley is a longtime journalist and former Washington Post reporter. His son Kevin was arrested after breaking into a house during a psychotic episode in Virginia. Earley couldn't get his son proper care because Kevin was not deemed an imminent danger to himself or his father. But Kevin was charged with felonies for the break-in.

So his father started investigating the criminal justice system and how it treats mentally ill people.

“I was so frustrated. Virginia law had kept him from getting help when he needed it, and now it wanted to punish him for a crime he committed when he clearly wasn’t thinking clearly,” Earley said to a packed conference room on Saturday morning.

At the beginning of his research for his book, Earley tried and failed to gain access to jails and institutions in Los Angeles, Chicago, Baltimore, New York City and Washington, D.C.

Then he got a call from Judge Steve Leifman of the Eleventh Judicial Circuit of Florida, who invited him to inspect the county’s facilities. In 2004, Earley walked onto the ninth-floor psychiatric ward of the Miami-­Dade County jail.

“I saw men completely naked in cells," Earley said Saturday. "Cells built for two people had five or six persons in there. Because of a design flaw, the cells were cold.”

That floor was closed down this earlier this year.

Alejandro Aristizabal works for the Eleventh Judicial Circuit Court’s Criminal Mental Health Project which is aimed at keeping out of jail mentally ill people who commit crimes due to their condition. He says people in those cases are often processed through multiple systems.

“You could be released from the hospital today on Zyprexa, arrested tomorrow... on Risperdal, and in the community you see a [different] doctor," Aristizabal said. "There are three doctors, three systems seeing you. All three of them have different electronic information systems that definitely don’t talk to each other, and there’s no continuity."

And it’s that lack of continuity and communication that has meant some people have difficulty leaving the criminal justice system. During Earley’s research in Florida, he discovered a woman who had been arrested for shoving another woman. The assailant made eye contact with the victim at a bus stop and thought she was stealing her thoughts.

“I discovered this woman had been in jail more than three years -- 1,151 days. Now, how can somebody be in jail that long? Because she was being sent back and forth... to be made competent, so she’d never even been brought to trial,” said Earley.

While there are still advocates who will point to deficiencies in the approaches to treating the mentally ill, Aristizabal says Miami­-Dade County has taken more progressive approaches to aiding people with mental illness.

He says the county has moved away from using structured housing facilities and day programs, going for more individualized plans.

“We’re starting to use clubhouses, drop­-in centers where it’s not preaching at people, it’s not throwing treatment at them, and [it's] more counseling and psychiatry," he said. "It’s actually trying to normalize people with mental illness.”

Aristizabal says many of the clubhouses and related facilities are giving their consumers a work-ordered day and socialization skills to increase their employment opportunities, as well as more recreation instead of traditional "sit down" therapy.

“If you can go play some pool, play ping­ pong, do a little exercise, yoga, meditation -- that’s what normal people are doing, so why do we have to segregate the mental health population into doing therapy five days a week?” he asked.

Florida ranks at or near the bottom when it comes to per capita funding for mental health services in the U.S.

This week on Florida Matters, we'll take a look at just how that's playing out in Florida, along with the push for more funding -- and smarter spending -- for those services.

The numbers, posted daily on the Cook County sheriff’s website, would be alarming at an urgent care clinic, let alone a jail: On a Wednesday, 36 percent of all new arrivals report having a mental illness. On a Friday, it’s 54 percent.