The 19-year-old man who’s confessed to the mass shooting at Marjory Stoneman Douglas High School that killed 17 people on Wednesday left a violent social media footprint. But the teens and adults who might have stopped him say they weren’t aware.

Many people in Parkland who know Nikolas Cruz say he had behavioral problems as a kid. Some say he appeared emotionally disturbed. One 17-year-old I spoke with said the confessed mass shooter “seemed to have no sense of personal control.”

But whatever Cruz’s issues, they appear to have spiraled downward when his 68-year-old adoptive mother Lynda died in November.

“It’s the only mother he knew," said Fort Lauderdale attorney Jim Lewis. "And they were very close, is our understanding. And the only father he knew, was also his adoptive father, had been gone for 12 years. So I think it, like anybody, that would unhinge you, quite a bit.”

Lewis represents the Parkland family that took Cruz into its home after his mother’s death. Cruz and the family’s teenage son were friends at Marjory Stoneman Douglas High School in Parkland, where Cruz was expelled last year for disciplinary reasons.

“He really had no good place to stay," Lewis told WLRN. "And this family opened their home up. And he was depressed, but he seemed like otherwise, you know, a good kid. He was working at a Dollar Store; he was going to school trying to get his GED. They didn’t see anything like this coming at all.

Including, Lewis said, Wednesday morning  when the family’s father woke Cruz up as usual to drive him to his adult education classes. Cruz said he wasn’t going.

“He said something to the effect of, ‘It’s Valentine’s Day; I don’t go to school on Valentine’s Day,’ " said Lewis. "Nobody thought anything of it. You know, it’s like a flippant comment the kid would make because they don’t want to get up and go to school.”

Instead, Cruz allegedly took an AR-15 semi-automatic rifle the family let him keep in a locked case to nearby Marjory Stoneman Douglas High. According to the arrest affidavit, he stuffed a backpack with numerous magazines of ammunition and arrived at the school that afternoon in an Uber car. Some teachers immediately recognized him – Cruz had apparently been barred from the campus after his expulsion – but he swiftly shot and killed 17 students and adults and injured more than a dozen more. It was one of the worst mass school shootings in U.S. history.

Before the massacre, Cruz left behind what Broward County Sheriff Scott Israel called a “very disturbing” social media history. One that may have signaled his potential to commit Wednesday’s atrocity.

And one Lewis says Cruz’s host family was not aware of.

“If they had seen any of it, he would not have been living in that house," Lewis said. "And they’re horrified.”

Horrified, he said, by all the Instagram photos Cruz posted of himself waving guns and large knives. Dressed in military caps, his face covered with bandanas posting violent, menacing and often vulgar comments. 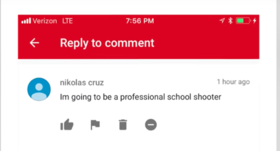 A white nationalist group based in Tallahassee – the Republic of Florida – says Cruz was a member. Its leader told the AP Cruz had told him he was having girl problems, and that Valentine’s Day may have been a dark for him as a result. (Law enforcement officials, however, have said they've found no evidence linking Cruz to the group.) (UPDATE: The Republic of Florida has since backed out of its claim.)

Cruz also posted photos of small animals he killed – something kids in Parkland who knew him say he often boasted about in a scary way. One teenager told me he stopped talking to Cruz last month after listening to him in a McDonald’s talk about how much  fun it was to kill things with guns.

But someone who did notice Cruz’s online behavior was in Mississippi. In September, Ben Bennight, a bail bondsman in Gulfport, saw a message on one of his YouTube video chats. “I’m going to be a professional school shooter,” it said – and it was signed by a Nikolas Cruz.

“I didn’t ignore it; I forwarded it to the proper authorities," Bennight said in a YouTube video he posted Wednesday after the shooting. He says he informed the FBI, which took the information. But the FBI says it had not been able then to link the YouTube chat comment to a specific person.

Lewis, the lawyer for Cruz’s host family in Parkland, said because Cruz was an adult and not their son they didn’t look into his social media habits.

But he said they had rules about keeping guns locked away in the house – and that they never even saw him use the AR-15 rifle, which he somehow bought legally.

“They didn’t see him as a scary dangerous person," Lewis said. "And really right now they are second-guessing obviously every decision that they made.”

They join a long line of families and friends of mass shooters in this country who share the same regret.

What We Know About The Florida School Shooting Suspect

The Broward Sheriff's Office has identified the suspect in Wednesday's deadly school shooting as 19-year-old Nikolas Cruz, a former student who had been expelled for disciplinary reasons. Law enforcement says Cruz carried out the attack that killed at least 17 people at Marjory Stoneman Douglas High School and left others hospitalized with gunshot wounds.

Cruz is now in police custody after briefly receiving treatment at a local hospital.

As students, staff and parents from Marjory Stoneman Douglas High School in Parkland gathered to grieve and comfort one another Thursday, the former student accused of killing 17 people was charged with murder and had his first appearance in court.

No bail was allowed for Nikolas Cruz, 19.

A Broward County Sheriff's Office report says Cruz confessed to being the shooter at the school.

According to the report, Cruz told interrogating officers that he "began shooting students that he saw in the hallways and on school grounds" Wednesday.

School Board Members Robin Bartleman and Rosalind Osgood held each other and cried underneath the Sawgrass Expressway after  a press conference Thursday in which the Broward Sheriff's Office gave updates on the massacre that killed 17 and injured 14 at Marjorie Stoneman Douglas High School.

Bartleman said the demands on guidance counselors and social workers in schools is “astronomical.”

A proposal that would allow some concealed-weapons license applications to be approved when background checks have not been completed was put on hold Thursday because of the deadly high-school shooting in Broward County.

The Senate Appropriations Committee had been scheduled to take up the proposal as part of a wide-ranging bill (SB 740) involving the Department of Agriculture and Consumer Services. The bill was not immediately rescheduled. The 60-day legislative session ends March 9.

In the wake of the Marjory Stoneman Douglas High School mass shooting that left 17 people dead, politicians on the state and national level are weighing in on what can be done legislatively.