Opioid deaths in Manatee County are on track to double by the end of the year.

County officials believe this spike is the result of Florida’s crack down on pill mills. Now, users are turning to heroin and a synthetic drug called fentanyl sometimes with deadly results.

The crisis is putting a strain on community agencies from law enforcement to treatment centers.

Brandilyn Karnehmof Bradenton said she got involved with pills as a way to make money around 2009.

She said doctors in Tampa were more than willing to hand them out at time.

“They really just cared about the money. You just went there, paid your money and they would see you and they’d be like ‘Oh, yeah you need this. You have all of these problems’ when in reality we didn’t. And they would prescribe you over 300 pills a month,” she said

Someone she knew would get them and Karnehm would help sell them.

Then pills started to get harder to find. Florida’s pill problem was attracting attention. In 2011, the legislature passed reforms to address the problem.

As pills disappeared, Karnehm said people turned to heroin – including herself.

“If I couldn’t find any pills, I would dread having to buy heroin because it was horrible… It was either going to be good and take my sickness away or it was going to be complete garbage and then I was going to be just on that wild goose chase trying to find more money to either try to find a pill or find somebody else who had heroin,” she said.

Karnehm was arrested in 2011. That led down a windy road including jail, drug court and treatment. Now, she’s clean.

Reminders of her past still creep up. Maybe it’s through a notice on social media that someone she knew just died from an overdose.

“People weren’t dying like this with prescription pills,” she said. “They weren’t and now this specific heroin, it's killing our whole generation.”

Chief medical examiner for Sarasota, Manatee and DeSoto Counties Dr. Russell Vega said, for a while, he saw overdose death rates across all three counties in the single digits. Then, in 2013, it rose to 16.

That rate marinated through the start of 2014. By the summer, Vega said things were different.

He says there’s really no pattern to who is dying of opioid overdoses.

They administer a drug called NARCAN to snap people out of overdoses.

Captain Todd Shear is with the Manatee County Sheriff’s Office. He said EMS gave 710 doses of NARCAN last year. By the end of August this year, that number was at more than 1,000.

He said heroin by itself is deadly – but the arrival of drugs like fentanyl, which people either mix with heroin or ingest by itself – can make the situation even riskier.

“It’s not the same as it used to be in times past. When you add into it the fentanyl, then you’re dealing with a very dangerous drug,” he said.

Shear said fentanyl is 40 to 50 times more potent than heroin. The Sheriff’s Office thinks fentanyl is being produced in homemade labs in Mexico. He said one of the main reasons opioids are making their way into Manatee County is because of how close it is to the Tampa Bay region.

Shear said they want to catch traffickers and not necessarily those addicted to opioids.

Local treatment centers are also feeling the pressure of the epidemic. 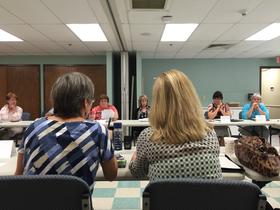 Dr. Jessica Crosby works at Centerstone, a Manatee County treatment center. She said she noticed an increasing number of heroin users coming into the addiction center about two years.

“I just remember looking at our list of individuals that we had in here and their diagnosis and thinking ‘Wow.’ I was so used to seeing opiate in pill form and I was seeing heroin, heroin, heroin, heroin and I remember thinking this is the most heroin I’ve ever seen,” she said.

Crosby said Centerstone only has 30 beds for its residential treatment program.

“If we were able to provide more, we would be able to get I think this problem under control a bit more, but right now 30 at this time is like a drop in the bucket,” she said.

Centerstone is one of the only residential programs of any kind in Manatee County. Crosby said users often reject the idea of outpatient treatment.

She said she hopes the legislature will provide them more funding during the next session.

Brandilyn Karnehm, who recovered from opioid addiction, now has a young child and lives with her boyfriend in their Bradenton apartment.

She said things are good.

“Life has been, it’s been great. It’s like once you subtract the drugs and the chaos, life can be good. I guess this is how normally people live every day,” she said.

She calls it life after addiction - one person who put it behind her as the rest of the county remains in its grip.

An investigation into a heroin and sex trafficking ring has ended with the arrest of more than two dozen people. The Orange County Sheriff’s Office made the announcement today after a two-year investigation.

Listen
Listening...
/
In this preview, we hear from Stephen Krivjanik, the chief of Emergency Medical Services in Manatee County -- and Capt. Todd Shear with the Manatee County Sheriff about how the problem is being measured.

Heroin overdoses are rising most everywhere, but perhaps nowhere more dramatically than in Manatee County.

Heroin Straining Those Who Protect, Treat

Listen
Listening...
/
4:12
Heroin overdoses are rising most everywhere, but perhaps nowhere more dramatically than in Manatee County. As Lottie Watts with Health News Florida reports the problem is really taking a toll on law enforcement and is straining the county's only in-patient drug detox center.

Manatee County, on Florida's west coast, is home to more than 300,000 people.  It's known for its beaches, and if you go just a short distance inland, you'll pass by the iconic fruit stands and working citrus groves.