To Lower Suicide Rates, Connecting With Men Is Key

This story was produced by WHYY's The Pulse.

"Did you know that men have feelings too?" he asks on his YouTube channel. "Not just the hippies, all of us. Hello, I'm Dr. Rich Mahogany, welcome to Man Therapy."

He's got a whole series of videos. How to practice deep breathing. How to relax by making a batch of "Guaco-Mahogany." And practicing yoga, in gruesomely small shorts.

Mahogany is a fake doctor, played by an actor. But these videos aren't just sketches. They're part of a highly calculated campaign to reduce suicide in working-aged men, by using comedy as a way in to talking about mental health.

"The increase in the overall suicide rates," says Centers for Disease Control and Prevention (CDC) epidemiologist Alex Crosby, "has been driven primarily by the increase among working age adults."

When someone dies by suicide in the U.S., it gets noted on their death certificate. Suicides are coded as "X" and then a number, depending on the method. For example, if a rifle was used, it's coded as "X73." Those codes go to the CDC, where they compile all of the demographic data.

"One of the things about suicide rates and suicides in the United States," says Crosby "is the majority occur among males, about 80 percent." 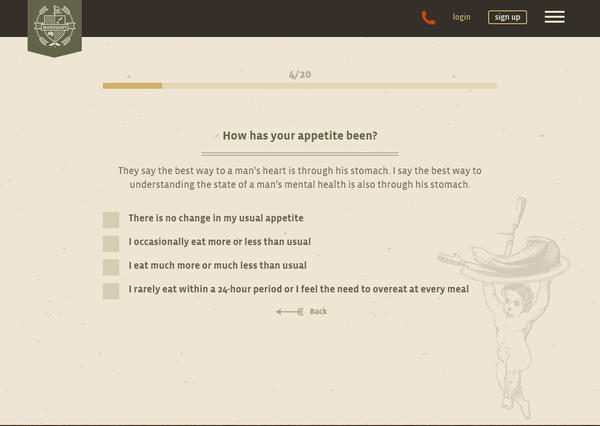 So if you want to be purely rational about it, to have the most impact on the U.S. suicide rate, you target men aged 35-64. But so far, that hasn't really happened.

"Most of the money in suicide prevention has gone to youth suicide prevention, and so we're glad to see that that's paying off," says Sally Spencer-Thomas of the Carson J. Spencer Foundation. "But men in the middle years are not considered often a category that is needing extra resources. It's just been a population that hasn't been addressed, in terms of their own mental health needs and their own mental health crises."

Her foundation tries to fill that gap with the "Man Therapy" campaign. It's based out of Colorado, but other states have co-opted it.

There are Dr. Mahogany billboards, drink coasters at bars, and signs above urinals, all winking at stereotypes about masculinity, and feelings. The Man Therapy website includes a five-minute quiz to access mental health and it shares tips and resources to help men help themselves. The foundation created Dr. Mahogany with the help of an ad agency, and focus groups full of working-age men.

"It's this subtle ah-ha moment for men," Spencer-Thomas says, "'Of course I have feelings. Why am I trying to deny that I having feelings?' And he walks men through this process of acknowledging that the stereotypes are actually getting in their way."

She says using comedy in the context of mental health can feel risky, but it's what her focus groups said they needed.

Spencer-Thomas also heads the workplace task force at the National Action Alliance for Suicide Prevention. They're trying to also reach men by encouraging conversations around mental health at work. Companies with lots of male employees, like Union Pacific Railroad, the NFL, and Facebook, are on board too.

"I really think if my brother had other peer men who said, 'Of course, I've had similar struggles. Let me hear your struggles, I'm here for you,' it would have made a huge difference," she says.

Spencer-Thomas's brother Carson died by suicide in 2004. He'd been a successful businessman, and had felt deeply ashamed about having a mental illness. She says she's seen in her work that men dealing with emotional issues can really benefit from seeing other men deal with tough stuff, and make it through.

"We thought just treating mental disorders would, you know, take care of suicide, but it hasn't." She says.

Pearson says it's only been within the past about 10 years that researchers have really studied on its own, not just an outcome of mental illness. Data shows that suicide can be prevented with therapy and outreach campaigns. But numbers also show that taking away popular means of suicide can prevent a lot of deaths. And when you're talking about means of suicide and American men, you're largely talking about guns. They're the number one method.

"People often argue," she says, "won't someone just use a different method? But when people are suicidal, they have a particular plan that's part of their constricted thinking of their one solution. And if you can actually delay that, or distract them, the plan doesn't go through. You have an opportunity to intervene."

Researchers say this doesn't have to be about getting rid of guns altogether. It could be a matter of increasing awareness of just how dangerous having a gun at home can be when its owner is going through an emotional rough patch.

Alex Crosby at the CDC says what we definitely need to fight suicide is more data.  The agency is working with data collection system called the National Violent Death Reporting Project. For suicides, it notes things like whether the person had attempted before, substance abuse history, whether they'd been getting treatment for mental illness. The hope is it will lead to better prevention efforts. The program is in 32 states so far, but the plan is to implement it nationally.

The CDC is also funding a study to figure out just how well the Man Therapy program works. Results are expected in five years.

Florida's rural counties are seeing suicide rates for youth almost double that of the state's large cities. And experts say isolation, poverty, access to firearms and a lack of mental health resources are to blame.

In a deeply personal note, Brown said he read opposition materials carefully, but in the end was left to reflect on what he would want in the face of his own death.

Florida State University is expanding its suicide prevention program, with a $306,000 dollar grant from the US Department of Health and Human Services, Substance Abuse and Mental Health Services Administration. The program aims to enable the entire campus community to identify and intervene with students in distress.

In an office decorated with signs proclaiming “Safe Space,” Peggy Saddler meets with students overwhelmed by classes, fighting with friends and family or struggling with deeper problems.

The Wauchula High School guidance counselor has worked with students in rural counties for more than 30 years and said sometimes students are “shutting the door every night (with) a little bit more than teenage angst.”