LIP Service: Hearings On How To Pay For The Uninsured Come To South Florida 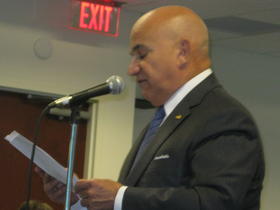 How will Florida keep paying healthcare costs for its poor and uninsured? That issue has brought the state legislative session to a halt. But it’s getting public hearings this week. On Thursday, the Florida Agency for Healthcare Administration brought the discussion to Doral - and South Floridians are especially anxious.

Florida’s $2 billion low-income pool – or LIP – is a joint federal-state program that reimburses hospitals for treating uninsured patients. The feds want the state to end LIP and instead expand access to Medicaid for some 850,000 Floridians under Obamacare.

The Legislature is deadlocked over the matter. But with or without Medicaid expansion, state health officials argue LIP should be preserved. South Florida has the state’s highest concentration of uninsured. So at the Doral hearing, healthcare bosses like Jackson Health System President Carlos Migoya said they too support keeping LIP.

“Since Medicaid only reimburses less than half of the actual cost," said Migoya, "Jackson will be forced to eliminate and reduce programs and services if LIP is not renewed or replaced.”

But Miriam Harmatz, the senior health attorney for the non-profit Florida Legal Services Inc., said  Medicaid expansion has to be part of the plan.

“To think we have an accessible safety net that can really serve the underinsured with LIP – and again even double or triple or quadruple LIP – is a myth,” Harmatz said.

The LIP hearings started Wednesday in Orlando and will finish Friday in Tallahassee.

Listen
Listening...
/
Press Listen to hear the radio version of this report

Florida Gov. Rick Scott sued the Obama administration Tuesday, charging that federal officials are coercing the state to expand Medicaid in order to get $1 billion in federal hospital funds.

The Republican governor points to a 2012 U.S. Supreme Court decision saying the federal government can't coerce states to expand Medicaid, which is exactly what he says the Obama administration is doing by withholding hospital funds.

Top Republicans in the Florida House made an offer Thursday to try to bridge a budget gap with Senate Republicans, but it could still result in the state's hospitals getting significantly less than they are receiving now.

House leaders offered to trim back spending on tax cuts and education - in order to boost spending in the state's safety net health care program. The offer, however, would be unconnected to a push by the Senate to expand Medicaid or revamp an existing program that takes federal money for hospitals.