TweetShareGoogle+Email
Listen
Listening...
/
Hear what it sounds like to give blood for the first time in this story airing on 89.9 WJCT.

Many Jacksonville hospitals are facing a critical need for blood – they have less than a day’s supply left on their shelves.

Patterson said once kids are out of school for the summer, people tend to give less.

“Unfortunately, when people are at retail locations, they do not always want to take the time to donate because they’re rushing to their cars with their packages and their purchases and trying to get home, so that has significantly impacted our donations,” she said.

Plus, in the summer:

“We take it very seriously when we have emergency appeals, and it’s because we truly, truly need it right now,” she said. 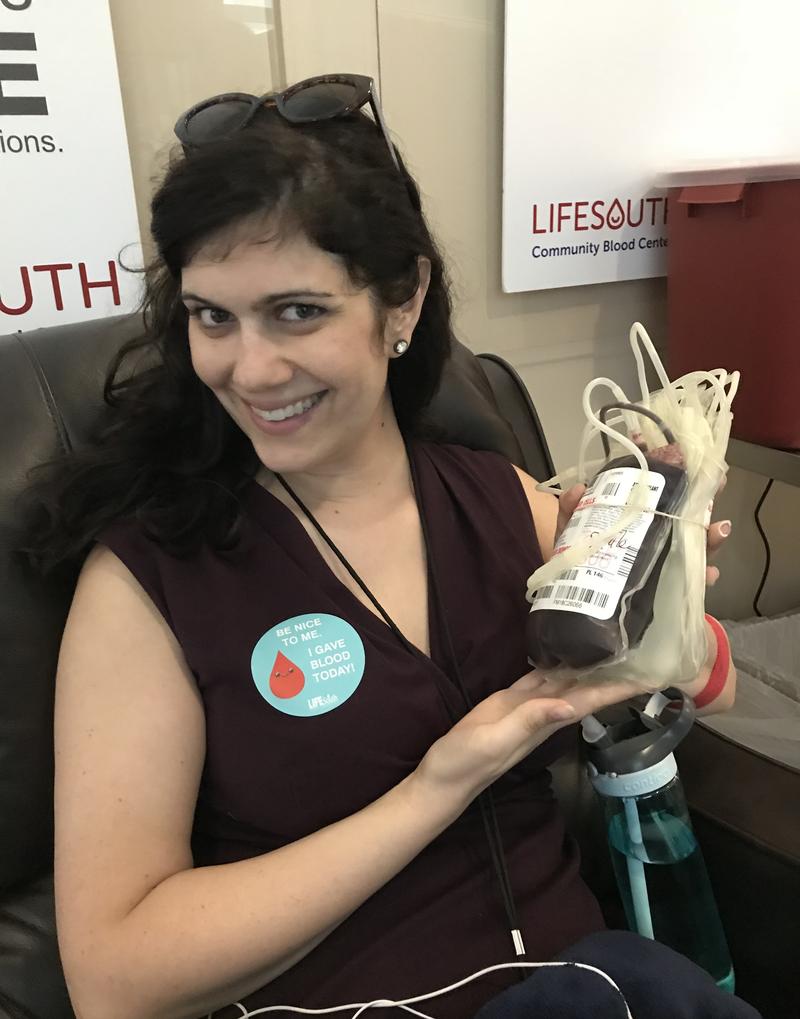 In addition to mobile blood drives — many of them on weekends — donors in Jacksonville can give at LifeSouth’s new permanent center just inside Baptist downtown hospital’s main lobby. It opened at the end of April, with an official ribbon cutting ceremony planned for June 14.

When I arrived at the center Thursday, technician Erika Freidly said, “I’m told this is your first time donating.”

After scanning my photo ID, she asked lots of questions, from the benign (“Are you feeling healthy and well today?”) to the intimate: “Received money, drugs or payment for sex?”

A physical exam included checks of my blood pressure, pulse and temperature, followed by a finger prick test for hemoglobin and iron levels.

After my hemoglobin reading came back too low, I passed a second test (Second chances are built into the physical process, Freidly explained).

LifeSouth estimates 37 percent of the population is eligible to donate, but only 5 percent do.

Next, it was time to sink into a big, comfy chair with a blanket and pillow for the main event. I chose peanut butter crackers from a basket as my mid-donation snack.

All in all, the process was quick: The donation itself was over in 11 minutes. The finger prick test was the most painful part.

But the potential benefit to patients is no trivial matter, Freidly said.

“You’re also saving three lives today,” she said, “because your blood will go to the lab and it will get separated from the red blood cells, plasma and the platelets, and they’ll go to three different patients that need each component."

Plus, she said, the more selfish among us might be motivated by a different benefit: You burn 650 calories by donating blood and generating new cells to replace it.

And many mobile blood sites are open weekends. Click here for a list of locations throughout the Southeast.

Following the holidays and a snap of unusually cold weather, some Northeast Florida hospitals are dealing with dangerously-low blood supplies.

At least four major hospitals in Jacksonville are making urgent pleas for donations.

Why Did Sterile Salt Water Become The IV Fluid Of Choice?

During a recent walk around the emergency room where I work, I noted the number of patients with bags of intravenous fluids hanging above them. Almost everyone had one.

Our ER in Boston isn't unique. IV fluids are among the most common medical interventions worldwide. Several kinds are available, but one called normal saline is by far the most popular. Over 200 million liters are used every year in the United States.

The state’s blood donation centers are sending resources to Texas hospitals affected by Harvey, now a tropical depression. OneBlood is asking Florida residents to give now.