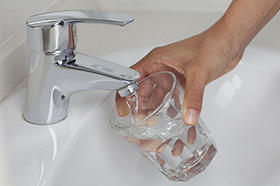 Sixteen Leon County elementary schools were tested for lead. The contaminant was found in drinking fountains and cafeteria water supplies. But only two schools—Killearn Lakes and W.T. Moore, had levels above what the Federal Environmental Protection Agency deems actionable. The others were above what the American Academy of Pediatricians deems as safe. And Florida A&M University Environmental toxicologist Dan Axelrod told the Leon County School Board Thursday the levels were nowhere near what was found in Flint, Michigan, which continues to deal with the fallout of widespread lead poisoning hidden from the public.

“I said this to the press, I haven’t seen it appear. We’re not Flint. Our high level at any school is 25 (parts-per-billion). Their high level is 500 times higher. What we have still isn’t good enough. But we have a potential solution," he said.

Axelrad’s solution is installing filters on sinks and water fountains to eliminate the lead. He along with Florida State University’s Vincent Salters conducted the study in July and August. Tallahassee allergist Ron Saff spearheaded testing efforts in Leon and Wakulla County where lead levels were also found  in  elementary schools. Saff says both school districts were quick to act. But he adds just because most levels were below EPA requirements don’t mean they are safe. A small amount of lead exposure can poison a child and lead to lower IQ’s, and the U.S. Centers for Disease Control says there's no known "safe" level for lead.

“I think there are likely some kids in Leon County who have ADHD because of lead exposure.”

That struck a chord with Board Chairwoman DeeDee Rasmussen:Rasmussen,

"Excuse me," she said. "That would be lead due to their home, maybe some other space, not just our schools, right?”

Rasumussen interjected, "Yes, but could you please clarify your point? You just said that potentially some of our students--" Saff finished, "Are getting it from schools."

Lead in homes is also a big problem. Saff is quick to say he’s not an expert in such matters. The person who is, The city of Tallahassee’s John Buss, says the city has consistently been rated one of the best drinking water systems in the nation—and he notes the region gets its water from the Floridan aquifer which doesn’t carry the high toxicity as the Michigan’s Flint River.  Buss says the city tests its water frequently.

“I know there’s a question about what is the water supply like going into the schools.Our testing is one part-per-billion. It appears that there’s a potential lead increase in the facilities, not from the source water in the facilities.”

The Leon County School Board took up a report containing findings of lead levels in the water supplies to several area schools. The group is considering installing new filtration systems on fountains and other drinking sources to eliminate the contaminant. But Board member Alva Swafford Striplin wants to know why the board wasn’t made aware of the tests, the results, and the corrective actions.

“Absolutely you should have been. It was a mistake on my part," said Leon County School Superintendent Jackie Pons. He liked the district's process to its usual review of air quality, which doesn't require a board report.

“This issue we shouldn’t have treated like we do other things. If there’s a health concern, we immediately call board members, we re-test, we let students know in summer programs who may have been in those classrooms…we could have done a lot better with this, and I apologize for that," said Pons.

Pons says the study on lead was one more than 60 research projects happening at the district at any time. Now he says he’ll ask the board to create a policy where projects come to the board for an overview so members are aware of what is happening in the district. Outgoing board member Dee Crumpler says he’d like to see an additional study to verify the results and bring forth solutions to decreasing lead levels as low as possible. The district has already flushed its systems but aging pipes in multiple facilities could prove problematic.

Lead is naturally occurring in the environment but is toxic to humans and animals. According to the EPA, "Lead and lead compounds have been used in a wide variety of products found in and around our homes, including paint, ceramics, pipes and plumbing materials, solders, gasoline, batteries, ammunition, and cosmetics."

The Leon County School Board is planning a special meeting to discuss lead levels in the district’s drinking water.

A Florida International University dean will lead a study on the effects of lead exposure on children's mental health thanks to a nearly $3 million grant.

Public Health Investments That Pay Off

At his site Our Health Policy Matters, consultant Paul Gionfriddo lists the public health initiatives that have had the biggest impact during his lifetime.