A group of Lee County residents met in downtown Fort Myers Tuesday night to stage a mock oil rig spill to draw attention to the risks of fracking and promote the proposed bipartisan legislation that would ban the practice in Florida.

A dozen concerned community members gathered outside the Old Lee County Courthouse. They stood beside a mockup of an oil rig made of painted plastic tubes. Shiny black garbage bags represented oil, and they appeared to spill out, dumping mock oil onto the pink plastic lawn flamingos.

Ruth McGregor held a sign of an endangered Florida panther alongside the words “Don’t frack me, bro!” 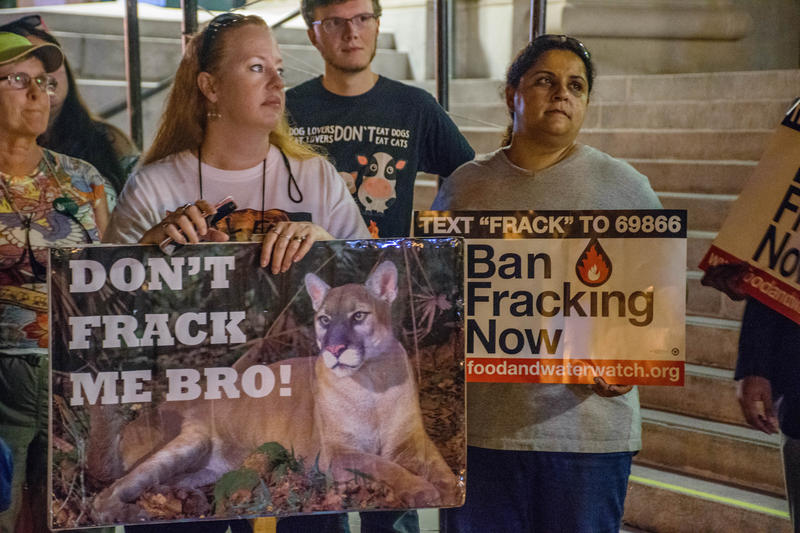 “Today, we are out here urging our legislators to support, in the 2018 legislative session, the fracking ban legislation that will be moving through, which is Senate Bill 462 and House Bill 237,” McGregor said.

That house bill was co-introduced by state Rep. Heather Fitzenhagen, whose 78th district covers the city of Fort Myers. She joined her constituents outside the courthouse with a “ban fracking now” sign.

“I don’t think everyone understands or really cares because it doesn’t impact them directly," Fitzenhagen said. "You’re not sitting at your kitchen table tomorrow at breakfast being impacted by fracking.”

The Republican representative has become part of a bipartisan effort to ban advanced well stimulation treatments – in other words, both hydraulic and acid fracking – across the state.

But, for crowd members like McGregor, this fight is not a new one.

“It is a very personal issue for me, just simply because of the fact that I was born in Texas," McGregor said. "I come from the heartland of oil and gas and also fracking as well. And, I have seen firsthand the degradation to the environment, the impacts on people’s health.”

Michelle Allen is the Florida organizer with Food & Water Watch, the national non-governmental organization behind the mock oil rig spill.

“Many things can go wrong when you are dealing with oil and gas exploration. One thing is just surface spills. I mean, accidents happen, right?”

The authors of a study published earlier this year – in the journal "Environmental Science & Technology" –would certainly agree. Researchers identified nearly 7,000 spills over the last decade between four states that allow fracking. The sample size included nearly 32,000 wells, meaning more than 20 percent of the sites practicing fracking had a spill in the last 10 years.

Fitzenhagen says the health and environmental risks of fracking are just not worth it, especially in the state’s tourism-based economy.

“Why people move here could be obliterated by a few simple mistakes,” Fitzenhagen said.

Clifford Mitchem is an energy advisor with Clean Renewable Energy Worldwide, or CREW. He says why people come to the Sunshine State is right there in its name – the sunshine – which isn’t going anywhere, fracking or not.

He says the simple solution to Florida’s energy issues can be found by just looking up. 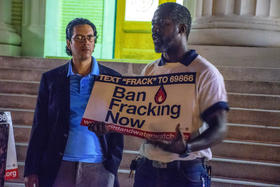 “Solar has grown to the point that it’s reached what we refer to as ‘grid parity,’ so it costs just as much to do solar as it would to stick with the utility company," Mitchem said. "So, you can go to a solar company and get your solar installed, nothing down. The monthly payments come out to virtually the same as somebody would be paying for their electricity.”

Mitchem says the problem is that many in the area are just unaware – of not only the solution, but also the problem itself. If they knew, he said, the entire city of Fort Myers would’ve met on the old courthouse steps.

The private board in charge of handing out funds from the BP oil spill is developing its application process. But sparsely populated Gulf Coast counties are worried they could lose out on some of the settlement money.

Gov. Rick Scott has about 10 days to sign legislation appropriating money to counties hit by the 2010 Deepwater Horizon oil spill. A settlement deal gives the state about $2 billion over several years.

State lawmakers are pushing to ban fracking in the sunshine state.  A similar effort last year failed, but Sen. Dana Young (R-Tampa) believes this year will be different.

The push by Florida's largest power company to charge customers for out-of-state fracking investments is dead, putting an end to a pair of big-money fracking fights this session in the Florida Legislature.