This summer, more than 215 million gallons of wastewater poured into the Floridan Aquifer when a sinkhole opened up at the Mosaic fertilizer plant in Polk County. 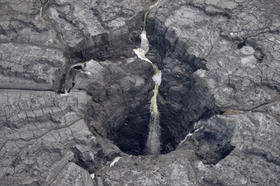 Also this summer, Hurricane Hermine flushed tens of millions of gallons of raw and partially treated sewage into Tampa Bay.

Governor Rick Scott swung into action with an emergency rule forcing polluters to notify the public within 24 hours of a major spill. But last week an administrative law judge sided with business groups and said Scott had no legal authority to act.

“Because that’s the goal and I know that’s the governor’s goal to ensure that there’s transparency and that the citizens have the opportunity to protect themselves if they need to.”

The heavy hitter of the Tallahassee lobby corps, Associated Industries of Florida, the National Federation of Independent Businesses, and the Florida Retail Federation, fought to kill the emergency rule. They argued it would force convenience store owners to call a press conference every time a customer overfilled a gas tank.

Peters says she’s still working on thresholds for triggering public notice, and what the warning should say. But she thinks boil water notices are a good model.

“It’s amazing how when a water main breaks the media is reporting on that so quickly. And it seems to be quite seamless. And so can’t we get the same kind of system on a spill if it’s a health issue so that we can get the word out quickly.”

However, Miller and Herrle insist they’re not opposed to the legislation. Herrle says he’s eager to help sponsors craft the language.

Legislative process as resulting in better public policy than just letting a state agency have a go at it.”

And that’s what worries Clean Water Network activist Linda Young the most. She’s afraid business interests will water down the legislation until it’s practically meaningless. A “may” instead of a “shall,” could make all the difference in the world, Young says.

Governor Scott can be expected to do just that with every bill that crosses his desk.

A researcher who tested the water around St. Petersburg for antibiotic resistant bacteria after the city released sewage into Tampa Bay didn't find any.

St. Petersburg faces $820,000 in fines from the Department of Environmental Protection for releasing over 200 million of gallons of sewage during summer storms.

The Pinellas County legislative delegation met Wednesday to prevent another massive spill of sewage into the county's waterways because of overloaded - and outdated - sewage treatment systems.

But one thing is becoming clear after hundreds of millions of gallons of sewage overflowed into Tampa Bay and Boca Ciega Bay after heavy rains this summer - a solution won't be cheap.

St. Petersburg Mayor Rick Kriseman has rolled out a plan that he hopes will keep more sewage from flowing into Tampa Bay.

Representatives of utility companies and municipalities told environmental regulators this week they are concerned that a proposed pollution-notification rule could place excessive reporting burdens on industry and local governments.