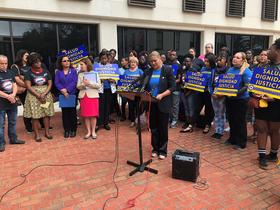 The Florida Legislature is looking to impose new restrictions on abortion. A measure that would ban a common procedure passed a divided House committee Thursday.

The bill would ban doctors from using forceps and other instruments to perform an abortion. The legislation uses the non-medical term “dismemberment abortion” to describe this procedure.

"HB 1429 expresses respect for the dignity of life by prohibiting a physician from performing this brutal and torturous dismemberment procedure on a living fetus," says Grall.

She argues the bill is constitutional because it doesn’t infringe on a person’s right to privacy or restrict access to an abortion, it simply regulates a medical procedure.

The measure does allow for these so-called dismemberment abortions if the mother is in danger and it’s the only remaining option, or if the mother receives an injection that kills the fetus prior to the procedure.

“All this says is that one of the means that’s being used in the vast majority of cases, which results in extreme and inhumane amount of pain to a living human being, should not be performed," says Spano.

A number of Republicans have expressed support for this bill, objecting to abortions based on moral standings.

But Democrats and many reproductive rights advocates argue this proposal not only restricts a woman’s access to abortions, but is likely unconstitutional.

Judy Scheklin shared her experience with a second-trimester abortion before the House Health Quality Subcommittee in January.

When she was pregnant, her baby tested positive for Tay-Sachs, a genetic disease that usually develops within the first six months of life. Infants with the disease develop vision and hearing loss, intellectual disabilities, paralysis and ultimately die.

“At that time I met with my doctor and she told me that I would have an option of an abortion she explained the procedure," says Shecklin. "And it sound though sad, tragic, horrible, it was something that was safe. And so I feel so compelled to say that this option must be available for other people who find themselves in this very tragic situation.”

“Thank you Judy," responds Rep. James Grant (R-Tampa). "Ironically my mother was told the same thing in the early 80s when she was pregnant with me.”

That exchange is one of many critics of the proposal highlighted as they boycotted Thursday’s meeting.

Rep. Amy Mercado (D-Orlando) was among those who participated. She says the bill is an attempt to erode abortion rights.

“I opposed this legislation then, I continue to oppose this legislation now because as I mentioned it is unconstitutional ban on the one and only procedure we have left for women that need abortions in late terms," says Mercado.

She argues the additional requirements increase the chances of complications, like infection.

Mercado also says Grall and others are relying on sensational language and unproven science, like fetal pain, to justify their actions, and she’s confident the Florida Supreme Court will rule the bill unconstitutional if voted into law.

She points to legislation from last session requiring a 24 hour waiting period before abortions, which the Supreme Court recently deemed unconstitutional, as evidence.

Planned Parenthood’s Missy Wesolowski also spoke at the boycott Thursday morning. She faults lawmakers for barreling ahead without considering the implications.

"The decision to terminate a pregnancy is a difficult one, and personal for every woman," says Wesolowski. "The conversations in committee have ignored the personal stories of women and discredited the experience and expertise of physicians.”

Similar legislation has been passed in several other states, but faces legal challenges or has been stricken down.

The bill is heading to the floor for a full House vote. It’s not clear if the bill will pass this session, as the Senate version of the bill has not yet been heard.

The state is appealing a Leon County circuit judge’s ruling that blocked a 2015 law aimed at requiring women to wait 24 hours before having abortions.

Attorney General Pam Bondi’s office filed a notice late Thursday that it will appeal the Jan. 9 ruling by Circuit Judge Terry Lewis, according to the Leon County courts website. The notice, as is common, does not detail the arguments the state will make to the 1st District Court of Appeal.

Florida lawmakers want to restrict certain abortions for women in their second trimester. Judges in other states have struck down similar laws as unconstitutional. But legal concerns are not slowing the bill down. A warning, this story may be distressing to some.