Lawmaker Looks To Save Money By Curbing Smoking 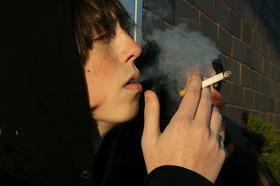 Would raising the age to buy tobacco products lower the cost of healthcare in Florida? One lawmaker thinks so.

Kitty Flynn started smoking when she was just 16.

“It was very cool at that time and I was a cool kid, so I started smoking,” Flynn said.

Then, in 1998, Flynn was diagnosed with cancer.

“I got a head and neck cancer. It metastasized to my lymph nodes. I fought it with everything I had. I spent weeks in the hospital. I had radiation. I had surgery,” Flynn said.

Flynn says she beat the odds to survive, and wants to do whatever she can to protect young people from living through that same experience. She supports a measure filed by Longwood Republican Senator David Simmons that would require a person to be at least 21 before they can purchase tobacco products. Simmons thinks his plan will reduce the number of people who start smoking to begin with.

“95 percent of adult smokers started smoking before they turned age 21 and many of them transitioned to regular use between the ages of 18 and 21,” Simmons said.

And Matt Jordan, with the American Cancer Society says increasing the age requirement will limit access to tobacco for young people.

But Simmons is anticipating a fight. When it comes to smoking, Simmons says many people consider it to be a right. But he says that right stops as soon as it begins to cause public harm.

“You have to look at it from the view of weighing the risks against the benefits and the burden the rest of society by virtue of paying for those healthcare risks,” Simmons said.

Simmons says there’s already precedent. For example, the state requires people to wear seatbelts. And he says healthcare costs are taking over the state’s budget.

“The point of it is that once viewed in the proper perspective, particularly of the costs of healthcare not only for the person who smokes, but those who have to pay for the person who smoke, if we’re ever going to ever address the issue of rising healthcare costs, which are in many instances bankrupting our budget then we need to say how are we going to solve that problem. And the answer is that this is one way of doing it,” Simmons said.

Simmon’s bill would also expand the definition of tobacco products—a move Jordan with the American Cancer Society says will go even further to help stop the use of tobacco among young people.

“And that allows things like Tobacco Free Florida and other cessation programs and preventable programs and education programs to them focus on E-cigarettes, which is every rapidly growing in our youth here in Florida,” Jordan said.

But Mario Norris with the Florida Smoke Free Association—a group that promotes vaping—argues e-cigarettes should not be included in the tobacco definition. He says points out some vegetables contain trace amounts of nicotine.

“So essentially a salad is a nicotine delivery device that should be classified the same way,” Norris said.

And Norris is worried Simmon’s bill could cause vaping stores to go out of business. Simmons workshopped his bill in the Senate Regulated Industry committee, but doesn’t expect the measure to move forward during this legislative session. He’s hoping committee members will help him push for a study this summer that would look into the impact tobacco use has on state’s medical costs.

A Florida judge has ruled that a lawsuit against the state’s decision to ban smokable forms of medical marijuana can proceed but without one of the key parties.

After spending more than five years pleading with the Florida Legislature to legalize medical marijuana, Cathy Jordan and her husband, Bob, were back in Tallahassee on Thursday.

In the wake of the deaths of 17 people from a shooting at a Broward High School, people are once again focusing on school safety. Administrators and elected officials alike are pushing for more funding to shore up infrastructure, but some are beginning to wonder if that’s enough.

State lawmakers are facing renewed pressure to pass gun control legislation following last week’s mass shooting at Marjory Stoneman Douglas High School in Parkland — and the Legislature is only scheduled to be in session for another two and a half weeks after it returns from the Presidents' Day recess.

State Sen. Gary Farmer, who represents nearby Fort Lauderdale, is pushing the Legislature’s Republican leadership to hear bills he and his Democratic colleagues have introduced in past years.

Designated people would be allowed to carry concealed firearms on school grounds under a bill added to the agenda of a Senate Judiciary Committee meeting next week.

During the next major storm, Florida may turn to university faculty and even students enrolled in health-care programs to help work with some of the state’s most vulnerable residents.

A bill that would restrict the most common type of second-trimester abortion is ready for a floor vote in the Florida House.

In a 13-6 vote, the House Health & Human Services Committee on Thursday approved a bill (HB 1429) that would impose new restrictions on doctors performing dilation-and-evacuation abortions, in which a woman’s cervix is dilated and the fetus is removed in pieces.