Latest Disease A Serious Threat To Florida's Reefs, But All Hope Is Not Lost

For the last couple of years, scientists and divers in South Florida have been watching as a new disease has been spreading along Florida reefs. It's a water-borne pathogen that kills stony corals — the big ones that serve as the foundation for reefs.

Scientists don't know what caused the outbreak. They do know that the number of different kinds of corals it attacks — and the rate they’re dying from it — is unprecedented. But so is the response.

The disease, which scientists are calling stony coral tissue loss disease, was first spotted in Florida near Virginia Key in 2014 and has continued to spread to the north and south.

Diseases are nothing new on the Florida reef tract — the first was reported in 1972 — but this one is different, according to Andy Bruckner, research coordinator for the Florida Keys National Marine Sanctuary.

"This particular disease is very unusual because it affects more species of corals than we've ever seen before. It has what's called a prevalence — the percent of colonies within an area that become infected when the disease first shows up is much higher than you see with other types of diseases," Bruckner said. "And also a very high proportion of those die from this disease." 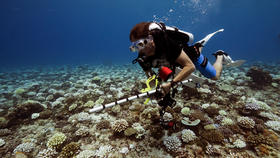 The disease has been observed in 22 different species of corals so far, especially the reef-building corals like mountainous star coral and some listed on the Endangered Species List like pillar coral.

Fortunately it doesn't appear to affect two of the Keys' most important corals, elkhorn and staghorn corals.

But the framework building corals are critical to the reef's structure, Bruckner said.

"The reef that you see, that reef was built by the skeletons of these particular corals," he said. "Corals, especially the framebuilding corals that are building this reef, can live for hundreds of years. Some of the very large corals that you see that are say, six to eight feet tall and five or six feet wide or larger, some of those may be as old as 500, 600 years old."

Scientists and resource managers aren't just documenting the disease. They're actually going out into the water and treating it, focusing on the interface between the diseased area and the live coral tissue.

"We can cover that interface with underwater epoxy or clay and that material is treated with something. We can use an antiseptic, like what they use in a doctor's office to clean all of your utensils and the tables and everything else," Bruckner said. "So we can put chlorine powder, is one of the things that we're using, where we mix that in with the epoxy and then place that on top of the diseased tissue and that will eradicate it.

"And we also have come up with a very, very effective mechanism where we take a broad spectrum antibiotic and we mix that in with either a silicone base or shea butter, something that's basically a lotion that we're using and then we use a syringe and apply that right on the diseased tissue."

Another approach is calling "trenching" — basically making a groove in the live coral tissue a couple centimeters ahead of the diseased area. That acts like a firebreak to stop the disease from spreading to the rest of the live tissue.

Divers could accidentally help spread the disease, since it's believed to be a water-borne pathogen and could ride along in neoprene and silicone dive gear, Bruckner said.

"The most important thing is that, when you come up from a dive, that you make sure you clean your gear and remove all the debris if there's any seagrass or algae or anything on it, that you get all that off and you don't dump that in the water in some other location," he said. "And then at the end of the day, especially if you're going to a new country or another region on the reef, that you wash your dive gear with a solution that is known to get rid of some of these bacteria."

The National Marine Sanctuary also wants divers to learn to recognize the disease and report it when they see it. They can report it at SEAFAN.

"The problem that we have is the Florida reef tract is extensive. Scientists can only dive so many locations. A lot of our monitoring that goes on only goes on once per year so we don't have a lot of information at certain times of the year, especially like during the winter for instance," Bruckner said. 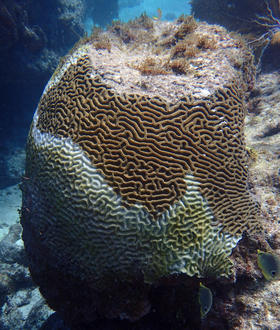 "If people see the disease and they report it, they help us identify places that we either need to get in the water and do interventions, we need to get more scientific information or do other steps to better protect and manage that particular reef environment.

There's a lot of bad news about coral reefs these days, from massive bleaching on a global scale to dire predictions about coral survival if climate change is not taken seriously in the near future.

But Bruckner said people should not give up hope for reefs.

"I believe that we have a lot of opportunities here to protect reefs and to revive them in places where they've been damaged. We're doing a lot of novel techniques and restoration. One of the biggest concerns affecting coral reefs worldwide is climate change. But what we've learned is that corals are able to adapt to some of these stressors over time as long as other factors that are contributing to their demise are minimized," he said.

"And so our philosophy is that if we do whatever we can on a local scale to reduce human impacts, the environment and the water quality will be better. And those corals will be stronger and they'll be able to better tolerate some of these global stressors."

It's a good idea to protect your skin with sunscreen when you're out on the water.

But protecting reefs means giving up some of the most common sunscreens that can harm corals. Studies have found that some ingredients, especially oxybenzone and octinoxate, are harmful even in very small quantities.

They call themselves the coral whisperers: a global band of scientists working together to save the world's coral reefs.