Krome Corps: Volunteers Reach Out To Immigrants In Detention

TweetShareGoogle+Email
Listen
Listening...
/
Nina Agrawal reports on a new volunteer program called Friends of Miami-Dade Detainees, which strives to connect immigrant detainees with the outside world.

Every Thursday night, Peggy Mustelier drives to the muggy, buggy edge of the Everglades to visit a man without a country.

Or so it feels for Danyel Ferraz, a 36-year-old undocumented immigrant and a detainee at the Krome Service Processing Center on Miami-Dade County’s western fringe. Inside the white, nondescript facility run by U.S. Immigration and Customs Enforcement, or ICE, Ferraz is awaiting deportation to his native Brazil – which he left as a teenager.

Guards usher Mustelier through the long corridors and steel doors to a visitation area. She and Ferraz sit across from each other in cubicles separated by glass and talk through a telephone.

“I bring pictures of my kids,” says Ferraz, pointing to a Christmas shot of his three young children. Mustelier and Ferraz talk about their families, what books they like, religion.

But Ferraz keeps returning to how unhappy he is in detention – and the fact that if he does get deported, he’ll be going to a country he no longer knows.

“You guys are busy,” he tells her. “You could be bowling, you could be on the beach, you could be eating ice cream, and you come and see us. That gives us encouragement.”

That’s at least one part of the mission that volunteers like Mustelier have taken up. Mustelier is a member of Friends of Miami-Dade Detainees (FOMDD), which has been arranging visits to people detained in immigration limbo at Krome since 2014. The Miami program is part of a national, San Francisco-based network called CIVIC, or Community Initiatives for Visiting Immigrants in Confinement.

The primary goal, says CIVIC executive director Christina Fialho, is to “end [immigrant detainees’] isolation and offer a connection to the outside world.” And at a time when politicians like Donald Trump have taken to demonizing immigrants, Mustelier says the effort might also cast immigrants like Ferraz in a less sinister light.

“I trust that as people become more aware and they start to see [them] as human beings,” she says, it could have a helpful impact on the polarized immigration reform debate.

After Ferraz came to the U.S. on a visitor visa in the 1990s and overstayed, he got married, had a family and settled in the Port St. Lucie, Fla. area working manual and construction jobs. But he was also arrested a number of times — and sentenced most recently for a felony count of marijuana possession.

Although it was a non-violent offense, ICE has increasingly prioritized the detention and deportation of felons, so Ferraz landed at Krome in January. An immigration court ordered him deported in February and the Board of Immigration Appeals dismissed his appeal in June, so it could happen any day now.

Immigration lawyers, however, say that many of the detainees held at immigration detention centers like Krome are not criminal felons. They may have been caught crossing the border, or they may be legal permanent residents who were convicted and served sentences for lesser crimes. They can be eligible for deportation if their crimes are more serious. 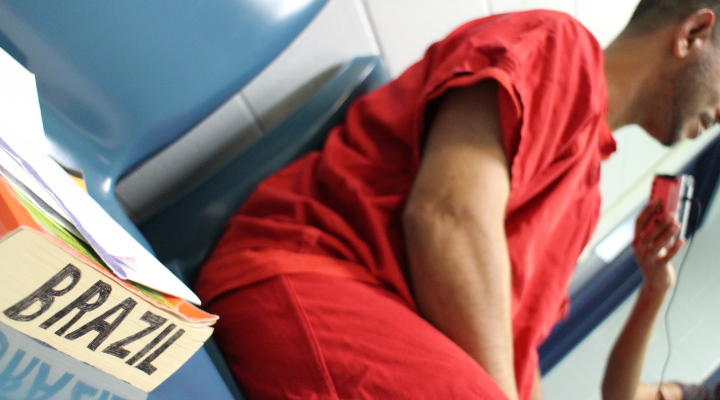 “I don’t know where their mission statement is coming from,” says Moore. “Our detainees mix and mingle and have a wide range of visitation hours for visitation, a wide range of interactions with clergy and, frankly, attorneys and other legal representatives. They don’t recreate individually. They recreate together.”

Still, Moore says the visitation program is “certainly not a negative,” as it gives detainees the opportunity “if they feel like they just want to talk” or hang out with another person.

Volunteers often do more than talk.

Lidia Moore (no relation to Marc Moore), who got involved with the Miami volunteer program through her church, says often “it’s just little things,” like putting money on a detainee’s phone account or sending him a book to read.

But Lidia also recalls helping a young detainee who was about to be released. She says he had no family nearby, so his sister called her and asked her to pick him up. When he was released, it was too late to put him on a bus, so she ended up taking him home, and her husband drove him to the Greyhound station the next day.

“It was very emotional,” she says. “He called me his angel — you know, like a guardian angel.”

Lidia, who was born in Cuba, says she volunteers in part to counter the negative comments she hears about immigrants. “As an immigrant myself,” she says, “I felt that it was important to let [detainees] and their families know that there are Americans who care about them and who aren’t judging them for wanting to come and live in this country.” 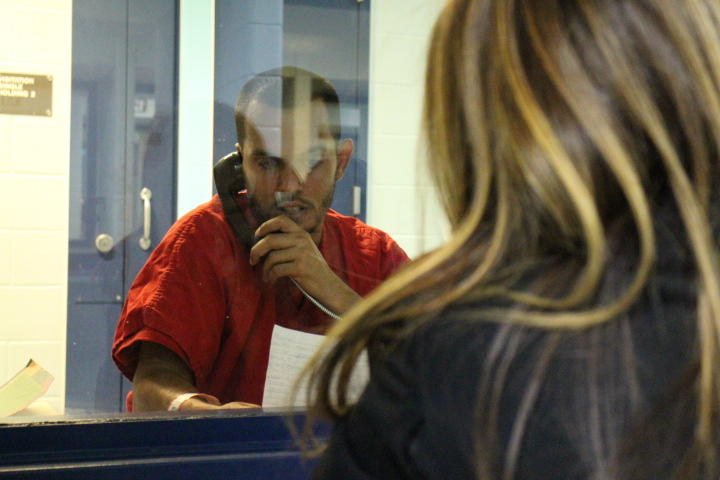 “The problems seem so big that sometimes it can seem overwhelming,” says Hutchinson.

As a result, says Fialho of CIVIC, the ultimate goal of her campaign is “to see the immigration detention system end.” More specifically, CIVIC hopes to shift toward alternative programs that let undocumented immigrants who are moving through the immigration court system live at home instead of in a detention cell.

In the meantime, though, volunteers like Mustelier will continue their weekly visits to Krome, talking and listening to men like Ferraz while they ride out their time in detention.

As she and Ferraz wrap up their visit, they put their hands up on the glass in a ritual salute.

Two young adults who were brought to this country illegally as children turned themselves in so they could investigate accusations of human rights abuses inside a privately-operated 700-bed facility for illegal immigrants.

While U.S. Sen.Marco Rubio and other Florida lawmakers tout their support for an overhaul of immigration policies, a showdown over emergency room care for illegal immigrants continues in Florida.